Accord points to first-grade use of Ms. at Peirce 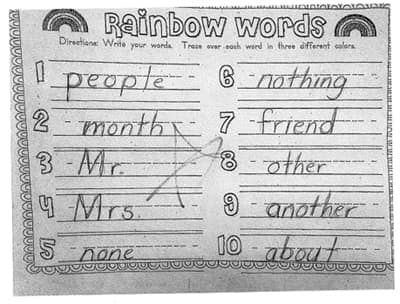 UPDATED, July 10: When first-graders at Peirce Elementary School are asked to recognize words this fall, they will be expected to use "Ms.," where appropriate.

The honorific, used in front of a woman's name as a way to steer clear of denoting marital status, has become common since the 1970s. Indeed, it is the title of a magazine launched in 1972 by feminist Gloria Steinem. Still, the term met resistance this year at the Peirce.

But following an an agreement about communication involving the town's Human Rights Commission in June, Principal Karen Hartley plans to follow the suggestion of school parent Rebecca Pearl-Martinez and encourage teachers to use the term. The rights commission says the accord supports all involved and leaves currciculum up to the school administration.

The parent, who the principal at Pearlwood Consulting, which provides advice about gender and diversity policy to international organizations, wrote to Hartley June 3: "Based on the positive exchange we had about future changes to Colonial Day, I would like to raise a second diversity-related curriculum issue.

"Five families (that I know of) at Peirce are concerned that the 1st-grade teachers do not regularly teach 'Ms.' as a sight word alongside Mr., Mrs., and Miss."

The parents called "'Ms.' is the current female equivalent to 'Mr.' In the past when gender inequalities were more ingrained than they are now (although many persist), 'Mrs.' was the equivalent."

Pearl-Martinez wrote that after teachers were asked to add this more gender-equal and inclusive terminology, one teacher responded in an email that she was unwilling to do so and another wrote that she added "Ms." because her current teaching assistant uses the term.

The parent added that the teacher's note that the term would be the same as "Miss communicated that she was missing the point of the progress toward gender equality that 'Ms.' represents. From other families across town, we hear that Dallin may be going one step further teaching 'Mx.'

"I realize this may seem like a small thing, but it is a concrete example of teaching children to uphold centuries-long discriminatory perceptions about women, LGBT individuals, and frankly any aspect of diversity.

"I and others would like to see teachers at Peirce mandated (and trained) to teach gender-equal terminology so that students benefit from a more evolved and inclusive perspective of gender and women's place in society."

For her part, Hartley responded June 4: "Our School Improvement Plan for this past year reflects a good deal of training, as a staff we carried out a book study on 'Culturally Responsive Teaching and the Brain' .... It went very well. I understand that some of the district selected curriculum needs updates and we have shared that with the department heads."

On June 6, Pearl-Martinez took the issue to a higher level and filed a complaint with the town Human Rights Commission.

On June 8, Mel Goldsipe, vice chair of the Arlington LGBTQIA+ Rainbow Commission, expressed support: "We agree that if 'Mr.' and 'Mrs.' are being taught in spelling lessons, 'Ms.' and 'Mx.' should also be included. And we support teaching these inclusive forms of address uniformly in school lessons across the school system, not just at Peirce."

On June 20, the Human Rights Commission considered the complaint and issued its conclusion eight days later. Chairman David Swanson wrote that the issue falls with the commission's purview and an investigation could follow. Instead, the commission voted unanimously voted to depart from this process to pursue the remedy listed in the complaint -- an "emailed statement from Karen Hartley confirming that starting in the 2018-2019 school year, all teachers at Peirce elementary school will permanently include 'Ms.' alongside the teaching of similar terms such as 'Mr.' and 'Mrs.'

"I am happy to relay that Principal Hartley has indicated to the commission that the 2018-2019 Peirce elementary school curriculum will include the word 'Ms.' and this will be a standard curriculum requirement moving forward."

Asked why is this decision important to children's education, Pearl-Martinez told YourArlington: "The term 'Ms.' is the modern equivalent to 'Mr.' Refusing to teach gender-inclusive terminology in the curriculum is discriminatory toward women and LGBT families, and sends a message to students and families that the identity of women (and girls) remains dependent on men and marital status.

"The decision to take this to the Arlington Human Rights Commission was driven by the Principal’s refusal, which escalated from initial written requests from multiple families to the school’s 1st-grade teachers."

She wrote that the "very small change ... would make diverse families feel welcome, and that teaches children to value gender equality and all forms of diversity.

"The language we teach children is powerful and has broad ramifications throughout our community. Outdated language teaches children to uphold centuries-long discriminatory perceptions about women, LGBT individuals, and any aspect of diversity. The families that took this on were inspired by the community's response to the recent hate incident by a group of boys at the high school, and by positive changes made to the Colonial Day curriculum.

"We want Arlington’s girls and boys to learn from an early age that our community believes in equality regardless of sex, sexual orientation, race, ethnicity, and all forms of diversity. Equally important is that public institutions themselves demonstrate that they value gender equality and diversity."

Pearl-Martinez added: "We are lucky to live in a town that has a human rights commission and an LGBT commission to uphold standards of equality, and to provide support when a leader refuses to make a small change that would make all families feel welcome.

"Given the recent policy progress in the US on measures to affirm LGBT equality, public schools should now be exploring adding terms such as ‘Mx.’ to the reading curriculum, an issues that has been discussed among Arlington public schools staff. The parents that contributed to the present complaint to the Arlington Human Rights Commission believe that Ms. should have already been standard terminology many years, if not decades, ago.

This news summary was published Friday, July 6, 2018, and updated July 10, to clarify copy.