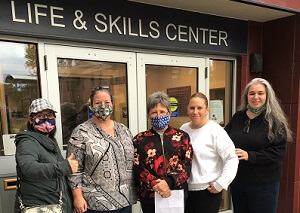 “There were 71 individuals who voted, so it was a great turnout, and really a testament to the great work that they did down there,” Nagle said in the remotely held meeting. “Kudos to them on that.”

The voting was overseen by Nagle, who helped ensure that only eligible manor residents were voting (18 years and over), Jack Cooper of the Massachusetts Union of Public Housing Tenants and Arlington’s League of Women Voters.

Hernandez called in to thank the board and the residents who came out to vote saying that she will “represent the Menotomy Manor and its residents to the best of my ability.”

Reached by phone, co-vice president Cayarga said she was “very happy to be involved” and hoped as a bilingual speaker to “help a lot of people, especially people who don’t speak English very well.”

The new officers will approve their bylaws before requesting certification from the housing authority’s board in time for the Oct. 20 meeting. The manor, a low-income, family-housing development in East Arlington, is home to more than 500 residents – almost 200 of them under 18 years old. It is also the largest and oldest property in the housing authority’s portfolio. It has lacked representation for nearly a decade, according to Marian King, a former tenant president and manor resident.

The tenant election comes at a pivotal time for the authority, which is slated to potentially receive at least $2.5 million in American Rescue Act Plan (ARPA) funds to replace the manor’s windows, which date to 1985.

The windows were a persistently raised complaint by manor residents during the general public part of the housing authority board meetings going back to 2020.

Not on the agenda, but on people’s minds, was the status of Executive Director John Griffin. During the local tenants’ reports, Winslow Tower President Pam Hauser wanted to know “if he’s coming back or he’s not coming back. It’s been well over three months since his last extension.”

Nagle replaced Griffin, whose request for an immediate and unspecified three-month leave of absence was approved by the board in April. No reason for the initial leave, which expired in July, or the ongoing leave, has been disclosed.

In addition to being appointed interim director in Griffin’s absence, Nagle continues to hold his position of operations manager for the authority. At the same time, Bob Cronin, director of maintenance, announced his retirement and his replacement is pending.

These three high-level positions will execute the implementation of the proposed multimillion-dollar ARPA funding within the three-year time frame, secure other funding such as the Community Preservation Act (CPA) applications, as well shepherd numerous ongoing and pending housing authority projects.

In an email to YourArlington, board Chairman Brian Connor wrote that “there is nothing further to report on John Griffin's status. However, in his continued absence, we remain very confident in Jack Nagle’s leadership and performance to date. As for the proposed ARPA funds, through the board’s oversight and [housing authority management] it will be utilized properly and on well-deserving projects and services.”

Nagle said he would be meeting with the residents of Menotomy Manor in October to “discuss their capital needs as we formulate our capital improvement plan for next year.” Part of that conversation will include replacing the windows from 1985 that residents have long complained about as being leaky, drafty, broken and energy inefficient.

Commissioner Gaar Talanian asked how Nagle came up with the $4 million-to-$6 million costs of the window-replacement project. Nagle said that it was “based off of our maintenance staff estimate,” but that the window survey recently approved by the Department of Community and Housing Development (DCHD) would guide next steps and costs.

The board approved the submission of CPA application for the window-replacement project, with Nagle explaining that this “is the preliminary application. We don’t need any supporting documentation at this point. Obviously, there’s still a lot of unknowns related to the exact cost of the [window] project, and we would need additional documentation in December” if selected by the committee to proceed with funding.

Arlington voters supported the CPA in November 2014. The measure provides cities and towns with dedicated funds to preserve open space and historic sites, create affordable housing, and develop open space and recreational facilities. The fund is financed through a property tax surcharge, plus annual distributions from the Massachusetts Community Preservation Fund.

To date, the housing authority has received nearly $1.5 million from the fund, including money for the Winslow Towers window and building-envelope repair project and the Drake Villages windows project.

The town has proposed allocating $2.5 million in ARPA funding toward the Menotomy window project, with the authority finding the funding for the balance of the estimated $4 million-to-$6million.

Nagle presented a comprehensive report about the various projects, community concerns and budget issues of the housing authority.

At Winslow Towers, Nagle said the $2.5 million Winslow Tower window-replacement and envelope building-repair project was nearing its final phase. The start date for the new $150,000 fire-pump replacement project will be announced next week, and the bids on the estimated $200,000 cost for ADA-compliant community-room bathrooms (for both Winslow Towers and Chestnut Manor) close this month.

The $100,000 balcony resurfacing project at Chestnut Manor is scheduled to begin, and Nagle thanked the residents for clearing their balconies in anticipation of the construction.

The $450,000 roof-replacement project at Cusack Terrace will begin soon, with project manager Caitlin Roberts available to answer resident questions and provide detailed guidance regarding parking and any other concerns.

Last year, the housing authority was awarded a $500,000 grant from the DHCD to improve the grounds at Drake Village and its access to the reservoir improvement site under development by the town of Arlington. The Creative Placemaking committee, the design team and the DHCD toured the property, and Nagle said he hoped to have more news related to that project soon.

Nagle reported that there was a cyberattack on the authority’s Voice over Internet Protocol service, affecting the office phone line and internet communications last week. The attack was experienced by other housing authorities throughout the region. He said that the problem was fixed and the security of the network strengthened.

The board voted to award Automatic Laundry, a West Newton-based company, a five-year contract to operate and manage all the laundry services in the authority buildings. The company, which provides laundry services to 100 housing authorities in Massachusetts and the tri-state area, will replace all machines with new, card-operated equipment sometime in November. Property managers are available to answer resident questions.

Vice Chairwoman Jo Anne Preston noted that Arlington’s Council on Aging administered flu shots to all authority residents except eligible seniors and disabled residents in the Menotomy Manor complex. Connor said Nagle would follow up with the Board of Health on this issue.

Unit inspections that were delayed due to Covid are ongoing. Menotomy Manor and the Hauser building are complete, with Chestnut Manor and Cusack Terrace scheduled for this week. The third-party inspections will be done according to local, state and federal Covid-19 guidance and restrictions, said Nagle.

Only Hauser, the Winslow Towers tenant group president, and Hernandez, the newly elected president of Menotomy Manor, addressed the board. The Drake Village tenants’ association is in flux following the death of tenant President Cathy Spencer in early August. Neither Sharon Elkins of Chestnut Manor nor Mike McGinty of Cusack Terrace presented a public report to the board.

Earlier this month, YourArlington reported that the Verizon landline phone service was offline for many elderly and disabled residents of the Hauser building, which Verizon attributed to aging copper-line infrastructure that needs to be upgraded to fiber-optic technology. In 2015, the Baker administration's Department of Telecommunications and Cable issued an advisory, "Copper to Fiber Transition: What Consumers Need to Know," explaining the issue.

The housing authority negotiates telecom-company upgrades to their properties, and Nagle said that "before we decide to sign an agreement with Verizon, there are multiple factors that need to be considered," including the cost of the project to the authority, the impact on existing internal systems, such as medical alert devices and emergency backup power during outages.

Service shut-offs to copper lines owned by Verizon are scheduled for Oct. 26, but Nagle said the housing authority was scheduled to meet with company representatives and "we hope that they will reconsider ending those services." As more information becomes available, it will be reported.

Because of technical issues with a chat feature in the Zoom program, public comments were not received by Connor. Nagle said he was “trying to work on it. I’ll have to look into that after.”

The board voted to approve the minutes from July 12 and Aug. 25 and unanimously voted to adjourn.

The next meeting of the housing authority board is set for 7 p.m. Wednesday, Oct. 20.

This news summary by YourArlington freelancer Melanie Gilbert was published Wednesday, Sept. 29, 2021. It was updated Sept. 30, to correct who administered flu shots, and Oct. 1, to change the word "malfunction" to "technical issues," as well as to add a photo.

Wright-Locke: Bake with us Dec. 22