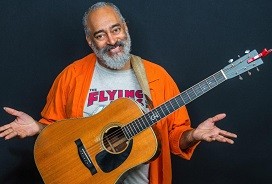 What do you get when you combine acoustic guitar, songs composed with a sense of poetry and infused with humor, plus a smooth tenor voice? That would be Arlington resident Vance Gilbert, at left, who is considered by some observers to be an integral part of the national folk scene.

The Robbins Library plans to kick off the 11th season of its series "Plug In @ the Robbins" with music from Gilbert, whose approach to the acoustic singer-songwriter idiom is all his own. In his own words: “I’m black, I sing, I play an acoustic guitar and I don’t play the blues.”

With more than a dozen albums to his credit to date, Gilbert is a seasoned touring musician with other concert dates scheduled between now and year's end in Connecticut, Maine, New Jersey, New York and Ohio, according to his website.

His free Town Hall appearance will be an in-person event, so there will be no need to register
Michèle Meagher, Coordinator,
Plug In, a Robbins Library series

This news announcement was published Friday, Sept. 2, 2022, based on information from the Robbins Library.