Director Paul Murphy, with McKenna Canty and Michelle Mount, in background. / Ginger Webb photosUPDATED May 22: AFD Theatre is staging "Boeing, Boeing," May 6 through 8, 13 through 15 and 20 through 22 on Fridays and Saturdays at 8 p.m., with a 3 p.m. Sunday matinee.

But before the show opens, at 22 Academy St., life was very busy. After a dark winter, AFD started up again with the final show of the season, "Boeing, Boeing."

A French farce written by Marc Camoletti, it tells the story of Bernard, a man smitten with gorgeous women. Simultaneously engaged to three airline hostesses, he has been able to juggle their schedules so that they never meet. Since they fly on three separate airlines, there is always one up, one down and one coming in to land.

But when Boeing brings in faster jets, their lives are about to collide.

The show is directed by Arlington resident Paul Murphy, who last seen in AFD’s December production of "Angel Street," and last directed the musical comedy "9 to 5" on the AFD stage.

An experienced actor as well as a seasoned director, Paul loves a good comedy. “I was drawn the show because it is so well written. It has a really tight, fast paced, funny script," he said in an interview. "We have a super talented cast who make the most of the play's great characters. The show is as hilarious now as it was back en it premiered in the mid-'60s. Right now, I think audiences are really ready for some levity and a good laugh.”

Backing up the cast is a set designed by Arlington resident Mark Bastoni. The script calls for seven doors in one apartment, and much of the action of the show requires split-second timing of cast members coming in and out of all those entrances. 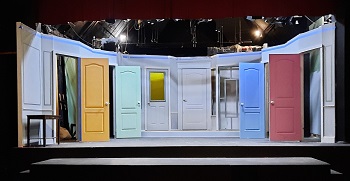 The AFD stage is somewhat narrow, with little wing space, so fitting in all those doors and still allowing enough space for some quick costume changes in the “bedrooms” was challenging. But Mark has designed and been set technician for Arlington shows before, so he is intimately familiar with the space. He decided to put the doors up first, then added the walls around them, once the director felt everything was in a good location. A set-building crew of about a dozen people have been building and painting and putting on the final touches.

Another Arlington resident who is critical to the production is Joe Stallone, who has taken on costume design. The 1960s was a glamorous period for air flight. People dressed in their Sunday best when they flew, were served gourmet food as well as free drinks and wine, since everyone was treated like royalty back in days when there was no distinction between first class and coach. Airline hostesses, all single young women, wore uniforms designed by the best Parisian and Italian designers of the day. Stallone has a team of seamstresses who are sewing and tailoring the costumes from scratch for the three “fiancées” to authentically look the period.

Other Arlington residents on the team include Ginger Webb as production manager, Tyler Chapman as assistant stage manager. Another trio of residents -- Ellen Baillie, Keiko Ogura and Marie Mueller -- are all trying their hands as props and set-dressing designers. Arlington Friends of the Drama is an all-volunteer organization, and loves teaching new recruits about the backstage world of theater.

The cast includes AFD member Dayle Ballentine as the long-suffering French maid Berthe. Jon Nuquist, who has acted in a number of AFD productions, plays Robert, an old friend who comes to Paris for a visit just as the airline schedules are about to collide.

This show brings AFD’s 99th season to an end. One of the oldest community theaters in the country, Arlington Friends of the Drama starts its 100th season in the fall. To celebrate its centennial, it will bring back one of its most successful shows from each quarter century. Since Gilbert and Sullivan was very popular in its founding years, AFD has chosen "Iolanthe," which audiences loved enough that it was produced three times in the early years.

Next up will be the comedy "Light Up the Sky," by Moss Hart. "Dancing at Lughnasa" by Brian Friel is the third show in the lineup, and finally "Nunsense" by Dan Goggin, which played to sold-out crowds when it was performed.

Tickets are $25, and can be purchased through the website  BUY TICKETS | arlingtonfriends (afdtheatre.org) or through email This email address is being protected from spambots. You need JavaScript enabled to view it. or by calling 781-646-5922. 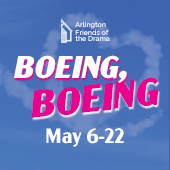 The theater is wheelchair accessible through an outdoor elevator to the left of the main entrance, and assistive listening devices are available.

Proof of vaccination and facemasks continue to be required at this venue.

This news announcement was published Wednesday, April 20, 2022, and updated April 23, to a feature by Ginger Webb, as well as May 15.

Schools
Bouquillon It was an occasion filled with high spirits, expressions of sincere gratitude and fond farewells at Minuteman High School as students, teachers and administrators showed their appreciation to the district’s longtime superintendent, Dr. Edward A. Bouquillon, and Minuteman freelance writer Judy Bass captures the mood of the May 12 event. He plans to retire in June after 15 achievement-filled years.  Under summery blue skies with a balmy feel in the air, hundreds of s...
Read more

Poetry
UPDATED May 20: Steven Ratiner, Arlington’s poet laureate, sought submissions in February 2020 from Arlington residents to contribute to "a rather unconventional, utterly delightful way to inject poetry into the everyday." It was to remain secret until its debut during April’s National Poetry Month. Then the coronavirus hit. In June 2021, he offers Red Letters 3.0. PUBLISHED:  I was asked to write an essay for Askold Melnyczuk’s Arrowsmith Journal about what I learned from the first ye...
Read more

Transportation
Adam Auster, in "Word on the Street," his long-running transportation blog, reports unsettling news for Arlington bus riders.  Under the headline "Arlington largely cut off from Alewife T under MBTA proposal," he writes: "The 350 bus, running once per hour from Alewife to Burlington via Arlington Center, and the 62, would be the only connections to Alewife from Arlington if a new bus plan for the T goes into effect. "The plan, part of a system-wide revamp of bus networks, also includes some...
Read more

Letters to the editor
YourArlington's policy about letters to the editor UPDATED May 8: YourArlington.com welcomes opinions of all kinds from local residents, including those about the U.S. Supreme Court's view of Roe v Wade. Letters are reviewed for fairness, factualness and taste. This site welcomes letters about any issue that stirs the public mind. Longer opinion pieces are also welcome. NOTE: When emailing a letter to The Advocate, consider copying YourArlington at the same time. Your opinions will be publi...
Read more

Friedman on Roe: 'We won't be silent'

Politics
Sen. Cindy Friedman has spoken out against a draft Supreme Court decision that lays out a legal case to overturn two key abortion decisions: Roe v. Wade and Planned Parenthood v. Casey. YourArlington partner Patch reported May 5 that the draft, which was published by Politico Monday night, shows that the court is on the path toward rescinding abortion access, which would lead to it being outlawed in many states. Photos of Arlington protest >> However, Massachusetts is one of...
Read more

Rights
Arlington town and school employees participated for a second year in sessions by YW Boston’s 2022 Stand Against Racism campaign aimed toward expanding knowledge about race and equity. Throughout April, the town’s Diversity, Equity and Inclusion Division was the host for four separate virtual sessions. The purpose of the Stand Against Racism campaign is to spread awareness and inspire action to eliminate racism. Sessions held empowered employees to broaden their knowledge of racism and...
Read more

Film
This review by Tom Meek was originally published in Cambridge Day, a YourArlington partner. Film Ahead is a weekly column highlighting special events and repertory programming for the discerning Camberville filmgoer. It also includes capsule reviews of films that are not feature reviewed.  Local focus The Independent Film Festival Boston wraps up its phenomenal 19th run at The Brattle Theatre this week. For tickets and information, see The Brattle website. It’s “May...
Read more

world
UPDATED April 22: The Arlington Human Rights Commission, the Disability Commission, the LGBTQIA+ Rainbow Commission and the Diversity Task Group of Envision Arlington on Friday, March 18, issued the following statement on the war in Ukraine:  We support Ukraine and everyone affected by the Russian invasion. As of this writing, more than 3.2 million people have fled Ukraine to neighboring Poland, which has taken in 1.9 million refugees, as well as Romania, Slovakia, Hungary an...
Read more

Town of Arlington to LGBTQIA+ students: You belong

Rights
Submitting the following news summary including opinion about a community conversation were Susan Ryan-Vollmar, cochair of the LGBTQIA+ Rainbow Commission, and Christine Carney, cochair of the Human Rights Commission.Dr. Roderick MacNeal at community conversation. We’re only a quarter of the way through 2022, but the year has already been a tough one for LGBTQIA+ people, especially transgender children and adolescents and their parents. Lawmakers across the country have filed a record-break...
Read more