An artistic tribute to Elaine Shea

Tiffany Tubby, who is a 2022 master of social work candidate at Fairfield University, provided the following tribute to Elaine Shea, an Arlington leader who died last March. The poem and video are published with her permission. 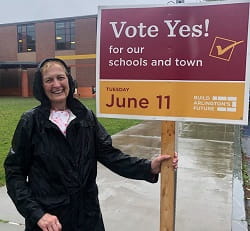 Some people knew of the late Elaine Shea as the wife of Bill Shea, a k a the unofficial mayor of Lincoln street. Some people knew her as a hard-working mother of six or as an activist for social justice and human rights.

For me, she became a motherly figure. She was there for me late at night and walked with me during dark times. She loved me and accepted me just as I was and made that known to me through her actions.

She taught me tools I could use to cope through life and she is the reason I am in graduate school about to complete my social-work degree.

I miss her dearly -- though if Elaine taught me anything, it was to use the tools already within me. For me, this was my creativity.

I am an artist and a writer. So in honor of Elaine, her favorite hymn and her beloved town- I went out onto the pavement near Robbins Farm Park and created this video. I hope Elaine would have liked it.

Tiffany attended the Rotary Club's Flags for Hero Memorial in June when she read the following poem she wrote on behalf of the Shea family. She also created this film to honor Elaine, "Chalk Series: Be Not Afraid":

What Your Mom Meant to Me

Your mom was a lighthouse - when I was living a life feeling stranded.
I was drowning from sadness,
I was weary and slumber.
Until, a Little Sister gave me your mom’s number.
At first, she didn’t know if she could commit.
She told me she would refer me out and would give me a list.
Though after an hour of sitting at her kitchen table, drinking tea,
She said she like to see more of me.
I was surprised, I didn’t think it would work out.
I was hesitant that this stranger was going to figure out- all my flaws, my messy life.
Though every time I came to her house, she greeted me with worth- a hug and a kiss.
The hours we spent chatting were truly bliss.
I began to look forward to my weekly sessions with Elaine.
I knew it would be a time I would feel valued as she would listen to me complain.
To show me I was more than people walking all over me She got on the floor and laid on her back.
I was more afraid of how she would get up into her chair,
But I’ll never forget how that day she showed me she cared.
That was the beginning of the sacred moments we would share.
And when I told her I didn’t care about myself,
She modeled to thine own self be true.
She encouraged me to use my “tools” of creativity.
And she would often share Churchill stories, vividly.
She answered my calls late at night.
If I asked her about her life, she would change the topic to make sure I was alright.
She gave me a safe place to stay when I was in a jam.
She was my rock and she held my hand.
Elaine taught me to be vulnerable and that I have a choice.
Her consistent belief in me helped me find my voice.
She often say, “Practice on me. I can take it!”
Though I am sorry for the words I now can’t take back.
I am sorry for the times I made her worry- that is a fact!
There were times she would get firm with me ever so slight,
I knew it was because she loved me when she said, “Oh Cripe!”
Yet, our relationship blossomed into mentor and friend.
I wrote many emails to her without ever pressing send.
She was the first person I called when I got accepted into my MSW.
She promised at my graduation a classic Elaine- woo hoo!
She is the reason, I will live my life paying it forward.
She gave me more than I could ever repay.
She gave me her time, her compassion and her love.
She was my lighthouse.
She flooded her light when I was lost at sea.
I just wanted you to know, what your mom meant to me.