This is the first in a three-part series about accessory dwelling units, or ADUs. The author, Philip Tedesco, is a real estate attorney who has lived in Arlington with his family since 2011 and is a member of Equitable Arlington, town residents who seek to promote a greater range of housing options to help make Arlington a more sustainable, welcoming and economically diverse place to live and work. 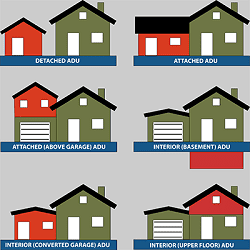 Arlington Town Meeting has the opportunity this spring to join many other Boston-area towns in allowing ADUs. The specific warrant article (43) will offer homeowners the ability to age in place, create independent living space for family or household members, downsize or earn supplemental income, while also encouraging housing for persons of all income levels and ages by making available more housing that is smaller and less expensive than existing alternatives.

This column explains the contents of Article 43 and answers some frequently asked questions related to ADUs. As described in more detail below, Article 43 contains thoughtful parameters to make sure that ADUs benefit Arlington residents, including provisions that prohibit the use of ADUs for short-term rentals and that prevent ADUs from becoming an opportunity for developers.

WHAT IS AN ACCESSORY DWELLING UNIT?

An ADU is a separate, smaller living unit with its own kitchen and bathroom facilities and separate entrance that is attached to or included within a larger residence, such as in a basement or attic, or located in an accessory structure on the same lot as a larger residence, as in a converted garage or carriage house.

WHAT IS PROPOSED IN ARTICLE 43?

Any ADU will be subject to all existing dimensional limitations, meaning that a homeowner could not expand their home to add an ADU any more than they could expand their home for additional living space. Based on the experience of other Massachusetts cities and towns that allow ADUs, we should expect the number of ADUs permitted each year to be modest – approximately two to five units per year.

ADUs will be built by existing homeowners, not developers, and the ADU cannot be “flipped” or otherwise sold as a condo. Under Article 43, someone seeking to build an ADU would need to certify to the building inspector that they or a family member will reside in either the principal dwelling unit or the accessory dwelling unit upon completion of the accessory dwelling unit. The proposal includes an exception to this certification for non-profit or governmental entities that restrict the ADU as affordable.

ADUs would still be subject to existing limitations on development that are imposed by the Bylaw. For example, an ADU would need a special permit if it would expand the gross floor area of an existing building by 750 square feet or more. In addition, because they are smaller, use existing infrastructure and will often be attached to the principal residence, ADUs will require less energy and fewer resources to build and maintain than detached, single-family dwellings.

Article 43 would not change any existing on-street parking requirements, which include a prohibition on overnight street parking on public streets and any applicable rules established for private ways, meaning that any additional vehicles for an ADU would be handled like any other additional vehicle a household acquires. In addition, there is, on average, typically less than one additional car for each ADU.

Allowing ADUs as-of-right would treat ADUs in the same way as any other addition or change to an existing residence (i.e., the addition of an ADU would be subject to the same rules as an expansion to build an additional bedroom or in-home office). Requiring a special permit more generally would depress the creation of many worthwhile ADUs because it would mean that even before the owner knows whether an ADU will be allowed, he or she must incur thousands of dollars upfront to engage a design professional and/or attorney, and undergo a public discretionary approval process. The exception is that Article 43 would require a special permit for an ADU in an accessory structure located within 6 feet of the lot line, which recognizes the concerns that neighbors may have in that situation where an existing structure, close to the lot line, is converted into an ADU.

Article 43 ensures that ADUs are built by existing Arlington property owners, rather than outside developers. More onerous owner-occupancy requirements in other jurisdictions have had the effect of stifling the creation of ADUs due to uncertainty and other unintended consequences, and have imposed burdens on ADU owners that don’t exist for anyone else. For example, more onerous requirements could result in non-compliance from changing life circumstances, such as divorce or death of the homeowner or a temporary job relocation and would complicate the sale and refinancing of homes.

Because ADUs are by definition small, they can be an important source of reasonably-priced housing within reach for individuals and families who cannot afford a single-family home or larger unit.  Article 43 does not impose specific income-eligibility restrictions on the residents of ADUs, however, since that would make it illegal in many circumstances for ADUs to be occupied by a family member, which will often be the reason an owner wants to create an ADU in the first place, and would make ADUs impractical given the cost associated with adding an ADU plus the administrative requirements of complying with affordability restrictions.

Arlington already prohibits the use of ADUs for short-term rentals (such as AirBnBs), so no further restriction is needed in this proposal.

ADUs do not pose any special enforcement challenges, and based on the experience of other Boston-area towns we should expect only a modest number of ADUs to be created each year. Arlington’s Inspectional Services Department will review all ADU permit applications and inspect all ADUs prior to issuing a certificate of occupancy, in the same manner as all other home improvements and other work in town, to ensure compliance with zoning, building code and fire safety requirements.