Robinson reaches for his star; goal tops Mexico in final

UPDATED, Aug. 2: Miles Robinson, who Arlington High basketball fans may remember from the heart-breaking MIAA loss in 2015, have seen the sports standout move on to wider notice as a soccer star in college -- and now nationally. 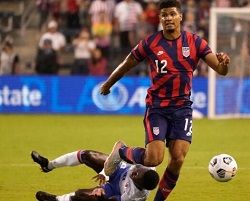 Read about Robinson's more recent exploits in a Boston.com feature written by Trevor Hass, also an AHS grad. Titled "‘Nothing fazes him:’ Poise has helped Arlington’s Miles Robinson develop into a USMNT Gold Cup starter," the piece reports that the 24-year-old Arlington native who starred at Syracuse and now a standout for Atlanta United FC, aims higher.

Robinson played for the Arlington Soccer Club from kindergarten through grade eight.

In photo by Charlie Riedel of the AP, U.S. defender Robinson moves the ball past Haiti midfielder Derrick Ettiene Jr. during the first half of a Concacaf Gold Cup soccer match in Kansas City, as the U.S. team won, 1-0, on July 11. Seeking a seventh confederation championship, his team crushed Martinique on July 15, 6-1, as Robinson scored. Read an ESPN report >>

At Syracuse, where his sister 'Becca set a school record in the indoor 400-meter dash, Robinson worked to carve out his own legacy with the Orange. He earned ACC All-Freshman Team honors that year and was the ACC Defensive Player of the Year the next season.

Atlanta took him second overall in the 2017 MLS SuperDraft, the team won it all in 2018, and a breakout season in 2019 -- in which he set the club record for most minutes played by an outfield player in a season -- helped put him even more on the national radar.

Dan Shaughnessy, Globe, July 13, 2021: Here’s one (local) reason to be interested in the NBA Finals

May 5, 2019: Connaughton appreciates roots: You can't buck a hometown hero

These links to sports news stories were published Wednesday, July 14, 2021, and updated Aug. 1.