UPDATED July 9: In a column headlined “What is our State House afraid of?,” I asked Arlington's legislative delegation -- Rep. Sean Garballey, Rep. Dave Rogers and Sen. Cindy Friedman -- to comment on this question: What steps should be taken to move this process forward, toward more public transparency, not less? Rep. Garballey is away but noted that he plans to respond. Meanwhile, the state House of Representatives on Wednesday passed a rules package that will extend some pandemic-era policies, but excludes several transparency initiatives such as making all members’ committee votes public. Sen. Friedman has responded, and it is published in full: 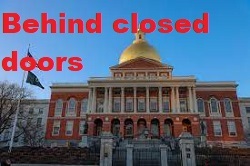 First and foremost, while I can’t speak for the entire “State House,” I am not “afraid” to be transparent with my constituents. I think there would be consensus from my constituents and colleagues that I am honest and very straightforward. I am always willing to share how I voted on a matter or how I feel about a particular bill – just ask me.

Second, in speaking for the Senate, we’ve been clear from the start where we stand on the issue. We had a robust debate in February when we discussed and accepted or rejected many amendments to a proposed set of Senate, joint and emergency rules. You can view those rules online:

In reviewing these proposals, you’ll find that the Senate goes further than the House when it comes to certain transparency rules. Under the Senate package, committees would need to post hearing information at least one week in advance, and any committee votes on bills taken by roll call or electronic vote would need to be posted on the Legislature’s website. The House had its own debate and released a version that, conversely, keeps the notice period at its previous 72 hours and would make public only the names of committee members who vote against a bill.

And yes, it is true: After public debate, the rules package, like any other bill negotiation, is subject to “closed-door” discussions. A feature of a bicameral Legislature is negotiation through appointed conference committees – a way to reconcile differences between Senate and House proposals. But we must not forget that the legislative process does not begin and end with these six-legislator conference committees; the legislative process is buttressed by a set of rules that allows for transparency leading up to those negotiations and results in an on-the-record vote on all final conference committee bills passed into law.

Also over the course of this timeline, the budget gets its own set of public hearings hosted by the Joint Committee on Ways and Means, similar to the public hearings held for all bills filed in the legislature. Members of the public are encouraged and welcomed to observe these hearings or provide written or oral testimony, as they are encouraged and welcome to do the same on any other bill.

Simultaneously, I, like most of my colleagues, are individually responding to hundreds of emails in support of or against elements of the budget, taking meetings with any constituent, stakeholder or advocacy group that reaches out, and communicating the collective voice of our constituency to legislative leadership.

Reconciling the two bills that come out of the Senate and House – bills that further represent the conversations, meetings and emails of all of these conversations and advocacy voices – is extremely difficult and is why negotiations on large proposals like the budget or rules package sometimes must be contained for the sake of practicality. (This is especially true when the legislature is trying to agree on 300-plus page legislation that proposes more than $46 billion in annual government spending.)

But that is what happens in a representative democracy. I represent the Senate, and my district when I am part of a negotiation. I am advocating for the bill the Senate passed, which is a public document. And I am representing the residents that elected me.

I fully support the Senate’s proposal for the 2021-2022 joint rules. I believe there is still no final compromise bill because the bill negotiators can’t come to an agreement on which version should prevail. I continually check in with the Senate members of this conference committee and they know where I stand on this issue, and I hope they can compromise a rules package soon.

So, to answer Bob’s original question about steps that can be taken to move toward more transparency, I think all of you can play an active role in that by calling more attention to the transparency issue, following the progress of bills that you care about, and contacting your state legislators and encouraging your friends to do the same.

In the meantime, and for the sake of transparency, I am happy to discuss with any constituent where I stand on this issue, and any other issue, and why I’ve taken the votes I have. My staff and I will also continue to work very hard to share information across my district on the issues that we all collectively care about in the 4th Middlesex District.

This viewpoint was published Wednesday, July 7, 2021, and updated July 9, to add Globe link.