Your View is the place for opinion at YourArlington.com. It is the site's only blog. Please submit your opinions to be considered for publication on this site. The best opinions are those supported by facts. You cannot expect to be published if your views lack factual support or if you make personal attacks. For your views to be published, your full, real name is required.
Font size: + –
Subscribe to this blog post Unsubscribe
Print
1 minute reading time (247 words)

Those burned by April blaze coming back

The fire that ripped through Thai Moon last April 29, seriously damaging the restaurant and affecting a number of adjacent businesses, leaves searing memories, but those involved are coming back. 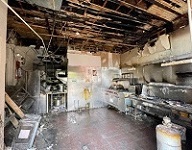 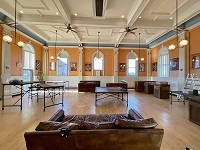 The two-alarm blaze started in the kitchen of the restaurant at 663 Mass. Ave. and caused $500,000 damage, according to an initial estimate.

Smoke traveled quickly through the duct work of the building, Chief Kevin Kelley wrote in an early report. “I want to commend the women and men of the Arlington Fire Department for their swift response in suppressing the fire to minimize damage.”

The photo at right of Thai Moon's kitchen on June 28, the day demolition work began, shows how far the business has to go.

At left, see improvements made to GoInvo, a digital design studio above Thai Moon.

Compare the look of that room to scenes from the April 29 video provided by Juhan Sonin, owner of the studio:

The studio that addresses health-care issues has been at 661 Mass. Ave. for 12 years. Thai Moon has been in town for 16.

Sonin promises a later video that includes more of the newly renovated space.

May 11, 2021: Artist loses studio in fire as first responders save some paintings