UPDATED, Dec. 9: The town's Board of Assessors violated the state Open Meeting Law in two cases and has been ordered to release uncensored meeting minutes to the former head of assessments as well as undergo training in the law. The board voted not to appeal "and we will live up to the conditions of the decision," Chairman Kevin Feeley said Dec. 8, adding the board disagrees with the decision.

"I never realized how egregiously the Board of Assessors violated Mr. Speidel's rights," Loreti wrote Tuesday, Dec. 2, "in particular by not giving him any advance notice of the executive session at which his performance was discussed, and prohibiting him from even being present during that session."

Asked whether the closed-meeting minutes would be released in full without redactions in 30 days, as ordered, Town Counsel Douglas Heim wrote that he would have to discuss the matter with the assessors.

On Wednesday, Heim responded to questions from YourArlington:

"Overall, I find the Division of Open Government's determination consistent with the Board of Assessor's responses to the complaints, wherein the Board admitted it made errors and explained how and why they occurred."

If released, these minutes would not go to the public, Heim confirmed, "unless the Board decides otherwise."

As to whether the assessor will appeal, Feeley wrote Thursday, Dec. 4: "As board members are unable to discuss any issue except in public session, it is on the agenda for discussion Monday evening."

He declined to comment about the decisions themselves at the time, but deferred to Heim, writing that " this is basically a legal question."

Feeley did provide comment to an Advocate reporter this week. 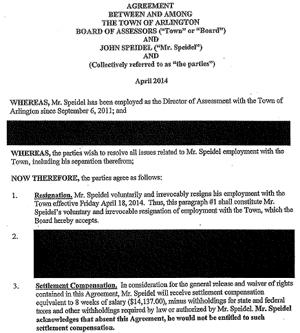 "I am glad the Division of Open Government is requiring the Board of Assessors to undergo remedial training on the Open Meeting Law," Loreti wrote. "Hopefully, these violations of the law won't be repeated by this board or any others in Arlington. The lack of professionalism demonstrated by the Board of Assessors in ending Mr. Speidel's employment has been an embarrassment to the town."

Sclarsic wrote: "Following our review of the first complaint, we find that the Board failed to provide Mr. Loreti with meeting minutes within ten days of his request. However, the Board took appropriate remedial action in response to the complaint by providing him with the requested minutes.

"With respect to the second complaint, we find that the Board violated the Open Meeting Law by meeting illegally in executive session to discuss the dismissal of an employee without properly noticing the executive session or citing a valid purpose for holding the discussion behind closed doors."

Sclarsic's letter stated that the assessors posted notice on April 3 for an April 7 meeting. The notice listed 10 topics, including "Minutes," "Old Business," "New Business" and "Discuss Revaluation," but did not list an executive session topic.

During that meeting, the letter says, the board entered into executive session "to discuss exemptions and abatements and not return."

Once it had voted to enter into executive session, the letter says, the board asked Speidel to leave the room. The minutes of the board's April 7 executive session have not been publicly released, so Sclarsic does do not recount them in detail. "However, we note that the minutes include only a few brief sentences memorializing the discussion, and record no votes," he wrote.

"While in executive session, the board discussed its dissatisfaction with Mr. Speidel's work performance. Though no vote was taken, the Board agreed to seek Mr. Speidel's resignation or, in the absence of a resignation, commence the formal process for termination.

"On April 16, the Board's Chair entered into a settlement agreement with Mr. Speidel, ending his employment with the Town.

After Speidel left, longtime member of the Board of Assessors Jim Doherty stepped down from the board and later became a candidate for head of assessments. Doherty was offred the job in July but declined to take it.

In September Paul Tierney of Winthrop got the job, and he began work in October.

June 22: 7 vie for assessor board, including selectmen's brother