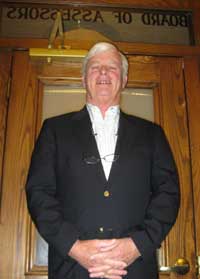 Bob Greeley at his office door.

The Greeleys, a family long known for public service in Arlington, is having a year of jarring changes. In early January, Kevin, a selectman since 1989, endured a knee replacement. In March, Brian, just 55, died unexpectedly of a heart issue.

The third brother, Bobby, remains healthy, but he's moving on as the town's director of assessments, a position he has held for 24 years. At the beginning of June, when his retirement is to begin, the affable architect of town property-assessment numbers will become head of the Arlington Municipal Federal Credit Union.

"I've never had a bad day here," said Bobby, who will turn 64 in May. "I’ve been fortunate, put food on the table for my family and sent three kids to college" -- to Bentley, Providence and an aeronautical school in Florida. One son is a vice president at Putnam Investments, a daughter is a VP of a subsidiary of Bank of America.

In an interview, Greeley said he has been lucky work with well-known, skilled department heads. Three he included among them are now retired -- Don Marquis, the town manager from 1966 to 2000; John Bilafer, the longtime treasurer; and Alan McClennen, who began as town planning director in 1974.

Each of these names, he said, would cause officials he worked with from around the state to say, "Oh, you work with ...."

The pride of working at Arlington Town Hall comes through, but the feeling has more ties to the past than the present.

On Board of Assessors from March 1985 to June 1987, the town official who tries to make sure the taxed values of property are in line with the neighborhood has held the job through much of the Proposition 2 1/2 era. In effect, during the period, he has seen town government steadily diminish.

As for changes in the data landscape, he recalled tracking it first with a TRS-80. These days, the data his office handles amounts to a terabyte.

"We're constantly putting out fires now," he said Friday, April 8, a day in which America waited for word about a federal government shutdown. "There's not the same desire on the part of young people for government service."

As Arlington faces a $6.49 million override vote in June, partly to preserve town services, Greeley's retirement is part of the changing landscape at Town Hall. In February, Fred Fantini, the longtime assistant treasurer retired. He is now the interim manager of the town credit union.

In December, Mike Rademacher, the town engineer, moved up to director of public works when John Bean retired, but he is still wearing both hats.

Caryn Molloy, the town's personnel director, was asked to comment about a search to fill the position, but she deferred to Kevin Feeley, chair of the Board of Assessors.

In a brief interview April 22, Feeley said he expects the position to be advertised soon, inside and beyond Town Hall, the latter route via trade magazines and the Mass. Municipal Assocation. He said he hoped the job could be filled in three to four months. the position requires talent to make judgments about property values as well as the ability to handle current computer systems -- and deal effectively with the public.

During the transition, Feeley said he knows he can call on Greeley for help, because he will be just "upstairs" -- that is, on the top floor of the Town Hall Annex.

While the job is a blizzard of numbers, as the town struggles to exact monetary meaning behind a taxpayer's brick and shingle, to Greeley the job has been simple: "Listen to what citizens are asking."

Beyond the numbers are the memories, over which floats the ghost of his father, Joe, a selectmen from March 1953 to March 1972.

Through has dad, "I think I've known every [Arlington] selectmen for the last 60 years."

Perhaps he's known every home, too -- and the stories each might tell ...

NOTE: The age originally reported for this story had Greeley 10 years too young, as a number of you have told me, so that has been corrected.