UPDATED Feb. 26: A taste of spring is all we got this week, and winter has returned with a vengeance, but the storm is already changing. Snow is giving way to sleet across some of Massachusetts as temperatures warm a bit from Friday morning's snowstorm.

By late morning, about seven inches of snow was measured north and west of Boston, with the final measurements certain to be higher — not to mention heavier. Sleet makes snow much denser and harder to shovel, YourArlington partner Patch reports. The National Weather Service reports Woburn had 10.7 inches as of 5:32 p.m. Friday.

Friday's "storm after the warm" started overnight, less than 48 hours after record-high temperatures near 70 degrees on Wednesday.

In response, Town Manager Adam Chapdelaine announced that a town parking ban was in effect from 1 a.m. Friday, Feb. 25, until 8 p.m. During this time, parking is  not allowed on streets and permitted spots. Vehicles parked are subject to ticketing and towing. Parking will be allowed in municipal lots at all times; rates apply after ban. In addition:

Patch: More than 200 crashes in Mass.

Also closed are Robbins and Fox libraries. All town administrative offices are physically closed, but services are available remotely (online and phone). All public skating sessions are canceled at the Ed Burns Arena, but they are expected to be open Saturday, Feb. 5, as usual.

Closings include offices at the following locations. 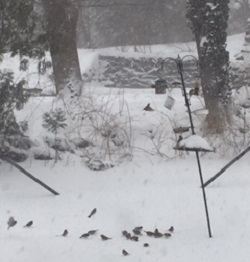 The National Weather Service reported 20.5 inches of snow in Winchester at 10 p.m. Jan/ 29. Click here and scroll down to Middlesex >> See BostonGlobe.com snow totals >> (none from Arlington)

Public Works crews worked over 30 hours to clear roadways and need to rest. Crews will return to snow removal operations in full force on Monday to clear sidewalks along Town owned properties, crosswalks on Mass. Ave. and prioritize intersections, and around routes to schools. These operations may take several days to complete.

Residents and businesses are reminded to clear public sidewalks and not move snow into the roadways in accordance with Town bylaws.

If you live on a corner, clear a path from the sidewalk to the street. If not precisely on the corner, as close to the corner as you can get.

There is no school in Arlington on Friday, Jan. 7, and all town offices will be closed, as the town braces for potentially 6 to 8 inches of snow.

Town services will be available remotely (online and phone).

This includes the following offices:

UPDATED, Oct. 27: An estimated 500,000 customers — some in Arlington, but many from the South Shore to the tip of the Cape — were without power Wednesday, OIct. 27, after a wicked nor'easter blew through Massachusetts, YourArlington partner Patch reports.

The storm damage forced schools to cancel or delay classes, affected morning commutes and forced a warning to stay off the roads.

More than two dozen communities have at least 80 percent of their power customers without power, according to the Massachusetts Emergency Management Agency. Some towns, like Hingham, Norwell, Abington and even on the North Shore like Hamilton and Essex, are 100 percent in the dark as of 8 a.m. In Plymouth alone, 26,900 customers are experiencing outages.

Extreme heat is a prolonged period of very hot weather, which may include high humidity. In Massachusetts, a "heat wave" is usually defined as a period of three or more consecutive days above 90 °F, YourArlington partner Patch reported from a town news release.

• If you must be outdoors, limit your outdoor activity to the morning and evening hours. Try to rest often in shady areas so your body temperature will have a chance to recover. Use sunscreen with a high SPF and wear a wide-brimmed hat.

• Never leave children or pets alone in a closed vehicle. Even with the windows cracked open, interior temperatures can rise almost 20°F within 10 minutes. 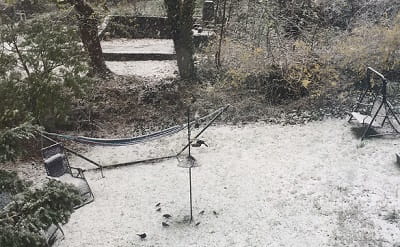 Unexpected snow on Friday, April 16, in Arlington covered
a backyard in Turkey Hill as birds flock to a feeder. / Marjorie Howard photo

UPDATED, Feb. 19: A winter weather advisory is in effect for Boston and eastern Massachusetts until midnight tonight, and for central and western parts of the state and all of Rhode Island until 7 p.m. Friday, according to the National Weather Service, BostonGlobe.com reports Feb. 19.

Expected snow totals for the long-duration event have been reduced from six to eight inches in an area that includes Arlington. They could reach between one and three inches, with an additional two to four inches possible in eastern parts of the state.

Forecasters are warning travel could be difficult and hazardous conditions could impact Friday morning commute. The storm is considered a low-intensity, long-duration weather event, and snow is expected to fall on and off into Friday night and early Saturday morning in some areas.

UPDATED, Feb. 9: The third storm in eight days added three inches of snow in Arlington, with temperatures below freezing.

Students participating in hybrid learning will be released early. All schools were dismissed at 1:45 p.m. Tuesday, Feb. 9, according to the Arlington Public Schools.

Any elementary programs that run between 1:45 and 2:30 p.m. were canceled, while Remote Academy had a regular school day.

But the storm was winding down, and so the town's snow emergency/parking ban, in effect after 1 p.m. Monday, ended at 9 a.m. Tuesday. Check arlingtonma.gov for updates.

Forecasts call for eight to 12 inches of snow to fall in the Arlington area, Patch, a YourArlington partner, has reported Feb. 2. The National Weather Service reports 8.5 inches have fallen in Middlesex County. A map on BostonGlobe.com shows 17.5 inches fell in Lexington as of 9:05 a.m. Feb. 2. Arlington shows 3.5 inches as of 7 a.m.