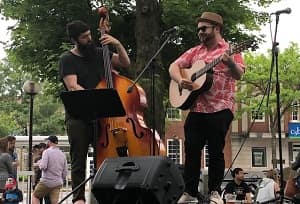 Aeronaut's beer garden returns to Allston this summer, but not to Arlington.

The event grew in popularity in 2019 at Whittemore Park after initial controversy in its first year, 2018. But after a year's delay because of the pandemic, the company has chosen a Boston neighborhood instead of a suburb.

"The town reached out to Aeronaut earlier this year asking them if they were interested in holding a beer garden in Arlington," Town Manager Adam W. Chapdelaine told YourArlington. "We explained that while there were no current plans for allowing outdoor events to happen in Arlington this summer, that we would be willing to work with them on finding a path to approval if they were interested. They declined the offer."

He noted that the Somerville-based Aeronaut purchased a brewery in Everett just before the pandemic began. "Having their hands full with their existing operations and handling Covid protocols in those locations were the primary reasons for them declining to operate in town this season. They remain open to hosting events here in the future."

Ronn Friedlander, Aeronaut founder and chief science officer, wrote May 11, "We are disappointed that we cannot bring our beer garden back to Arlington this summer. We'd love to be invited back, and perhaps when summer 2022 rolls around, we'll be in a better position to make Aeronaut Arlington a reality again."

He added: "While it's true that we opened a new location and have our hands quite full this summer, the bigger concern we had was related to uncertainty with the state Covid regulations. We know that under current rules, everyone would have had to be seated, so that would have required tens of thousands of dollars of investment in tables and chairs.

"It would also have greatly reduced overall occupancy. Given the setup we've had in Arlington in the past, we'd also need to arrange storage, which would have to be much larger to accommodate the extra furniture. So the increased cost, uncertainty with changing regulations and the reduced occupancy made an Arlington Beer Garden nonviable for this season. "

He said that the location in Allston remains a seasonal pop-up and is not permanent.

Plans for Arlington's beer garden arrived in the spring of 2018 and met a number of public questions, including the proper use of Whittemore Park, in the Center. Officials adjusted plans for the periodic summer event, and attendance was robust. That continued into 2019.

The garden became part of the community, receiving its own secure space at Town Day in 2018.

Boston Restaurant Talk first reported, May 10, that Aeronaut planned to hold a beer garden in Allston.