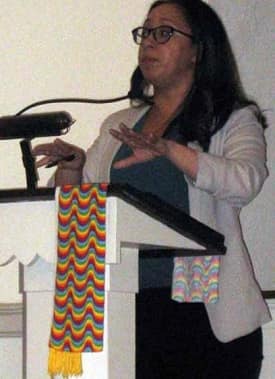 Sofia Hall: "I came from a family with numerous police officers .... I am not anticop."

The event was titled “Racism, the Criminal Justice System and the Way Forward.”

The estimated 45 people at Calvary Methodist Church on May 16 heard three speakers offer stark examples of how racism persists within the local justice system.

But the last part of the title, the way forward, remains murky. Some raising the issue of restorative justice in the case of Arlington police Lt. Rick Pedrini made clear they were looking ahead and hoped for change.

Sophia Hall, an attorney for the Lawyers for Civil Rights, was the main speaker. She actively represents people of color and immigrant women.

On April 29, her group helped file a lawsuit against ICE, seeking an end to federal immigration enforcement in and around Massachusetts courthouses.

Her legal team also filed a federal civil-rights lawsuit against the Boston Police Department on behalf of the family of Terrence Coleman, a black man living with schizophrenia who was shot and killed by police when seeking medical assistance.

"I came from a family with numerous police officers," including a chief, she said. "I am not anticop."

She said the progressive reputation of Massachusetts suggests that "we should never deserve to be on a list of 'bad' states .... but we should be on that list."

Her comments focused on solutions. She said her group instituted a training program for Walpole police after charges in that town racial profiling.

As to the fatal shooting of Coleman, she said, the case focused on his disability and aimed to improve how police treat the disabled.

The second speaker, Patricia Montes, founder and director of Centro Presente, an immigrant-rights organization. A native of Honduras, she has served as the board chair of the Boston Women's Fund and is on the executive board of Alianza Américas.

She suggested "police spend a day in Central America," a remark that drew applause. "We need food, we need jobs."

Douglas Keith, of Black & Pink, says he has been working for 17 years with transgender and the unconnected. "No man, woman or child should be left to die," he said.

He raised the issue of Lt. Pedrini directly, referring to "the officer who wrote those words." The 23-year officer was placed on paid leave late last October for harsh written comments that ran counter to the atmosphere fostered by then-Chief Fred Ryan. He was reinstated to the acting chief's office April 15 following sessions of restorative justice, a way of dealing with offenders without shame.

"I don't look at the color or the race -- I look at their souls," Keith said.

As to Pedrini: "We have enough gun violence in schools." He referred to Trump, who he said "perpetuates racism." He said Pedrini "should have been taken off the police force."

"I didn't come here to bash," he said of the Arlington Police Department, adding, "People should have been marching in the streets."

Use of restorative justice questioned

Some questions from audience indicated sympathy for that view.

Sheri Baron, a member of the Human Rights Commission, asked Hall what she thought of using restorative justice in the Arlington case? She noted that the commission had been involved in collecting statements from the community expressing how the officer's word had hurt them.

In one of three opinion columns complaining about the direction criminal-justice reform, he wrote: "I am sick and tired of the social justice warriors telling us how to do our jobs. It's time we forget about 'restraint,' 'measured responses,' 'procedural justice,' 'de-escalation', 'stigma-reduction' and other feel-good BS that is getting our officers killed. Let's stop lipsynching, please! Let's meet violence with violence and get the job done."

Baron asked: When is restorative justice useful and appropriate?

Hall explained its usual use, valuing how acts affected others. "It's not about shame," she said, but is an alternative to prison or similar punishment.

She called restorative justice "a good tool," but she had questions about that "if this is the only time using it .... if the people in the circle are not the ones affected."

Restorative justice involved meeting in a circle with those who have affected by the harm. In Arlington's case, more than 100 people submitted statements, but town officials participated in the circle.

'Would have been reinstated anyway'

Hall said she was told that the union -- representing ranking officers -- said: "He would have been reinstated anyway."

Ann Mathes, a member of First Parish church, outlined the use of restorative justice in the case of Black Lives Matters signs in front of the church defaced in 2015 and 2016. In that case, the perpetrator faced a circle of church members.

Hall said she sees value in such an approach if Pedrini "learns from that."

Laura Kiesel, an Arlington writer who organized and moderated the event, offered comments. She said she and Town Manager Adam Chapdelaine had a one-on-one meeting the week after restorative justice for Pedrini was announced. The date of the announcement was Feb. 22.

She said her first question was whether the decision to seek restorative justice was connected to the union's preventing him from firing Pedrini.

"He told me it was not that, but that in general it is nearly impossible to fire a police officer in Massachusetts," she said. That is because police can sue and be reinstated during arbitration, she recounted.

She said she named a Leominster case in which a police officer had been fired for making racially insensitive remarks and was later not reinstated. Read about it here >>

In an email after the meeting, she wrote: "Other people I know who have spoken to Adam or others in high-ranking position in town has cited the union as a reason. So it seems there are conflicting reports about why, which troubles me."

YourArlington asked Chapdelaine to address broadly the Pedrini case. On May 24, he noted that Pedrini is a member of the Arlington Ranking Officer's Association, whose new contract was settled May 17. The association's agreement "has language, which is very common, about what the standard is for imposing discipline against an officer commonly referred to as just cause."

The contract's grievance and arbitration language specifies what happens if there is a disagreement about the enforcement or application of the contract; that is, arbitration.

"In regard to arbitration, a review of multiple cases over the past several years suggests that there is very little certainty in outcomes regarding contested discipline," he wrote. "In this case, I strongly preferred an option that allowed the town to control the outcome. Restorative justice provided us with that option."

At the May 16 forum, town resident Erik Pohl asked Montes about Trust Act towns. He clarified his comments after the meeting: "Boston is a Trust Act city. Arlington is a Trust Act town. With the Boston Police Department working with ICE to punish a whistle blower who filed a workman's comp claim against his employer, and with an Arlington police officer suggesting the military would be appropriate to attack refugees and immigrants, how can trust be restored to the undocumented residents and visitors of Boston and Arlington?"

Pohl paraphrased her response. He said Montes gave a history of getting the Boston Trust Act and similar acts in other municipalities passed. She mentioned that we could work toward resolving the root causes of immigration by improving U.S. policies relating to those countries.

At some point, she suggested the Arlington officer visit the countries from which the immigrants are coming from to see the conditions there. She said immigrants have a hard time trusting officers in uniform already because of the oppressive use of police by corrupt regimes in nations they are emigrating from.

Asked by another audience member how we disentangle issues of criminal justice and immigration, Hall cited the federal lawsuit involving Chelsea Collaborative, aiming to keep ICE from federal courthouses. She said ICE detains 40 people at courthouses. Trump equating immigrants with criminals. The court case was due to begin May 23. She called chances of success "50/50."

Audience member Lynette Martyn noted in Pedrini's apology the lack of a reference to any particularly targeted group.

"A lot of the town is really afraid," she said. She wanted to know what rights citizens have in this matter, and what actions can be taken.

Hall responded: "I don't know if anything can be done," adding there are "a lot of legal reasons for this."

She suggested filing complaints with the town over its use of restorative justice, but was not specific. With enough complaints, she said that next time the town "may worry about its own liability for not firing" an officer and won't use this approach in a personnel matter.

Following the meeting, Martyn was asked what she planned to do. She suggested that she and others may look into filing an article addressing the issue for the next annual Town Meeting.

At the meeting, Montes said: "Organize and protest ... if you keep quiet, nothing is going to happen."

May 1, 2019: Rights group withdrew from restorative justice for Pedrini after protest

Creations by local artists to be displayed in late August

There was a recent call for wall art to be…