In response to 3 arson fires at 2 chabads

UPDATED, May 22: Who knew what joy could emerge from a community after three small arson fires, two in Arlington, were lit at the home/chabad of a rabbi? 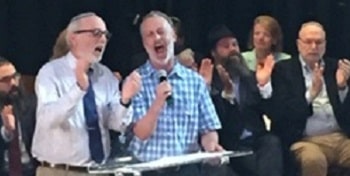 We learned about 6:15 p.m. Monday, May 20, when an estimated 500 to 600 people jammed Town Hall to express solidarity with Jews and all communities expressing no home for hate here.

"I want to thank the community for all that you have done for supporting us and encouraging us throughout the last few days," said Rabbi Avi Bukiet, who spoke with his wife, Luna. "What unity is being shown in ... Arlington .... "That moral consciousness, that universal love for humanity has shined bright and I am completely overwhelmed by what I see in front of me."

What he saw were many holding signs designed by Hardy students saying "Love Lives Here." He saw children cross-legged on the Town Hall before him. Above him, a packed balcony, and many taking up the standing room remaining.

The event, hosted by the town's Human Rights Commission, aimed to display support for the Center for Jewish Life on Lake Street, hit by fires this month, with a third at a chabad in Needham. Town, state and federal officials continue to investigate.

The Globe reported May 21 that the U.S. Attorney's Office in Boston was taking the lead in the probe.

The many speakers fashioned a message of solidarity. Rabbi Marc Baker, president and CEO of the Combined Jewish Philanthropies, was one of a number who spoke against anti-Semitism. "We are not alone," he said.

Naomi Greenfield, cochair of the town rights commission, called the event "truly incredible. It felt specific to the incidents at the Center for Jewish Life, broad enough to encompass anti-Semitism facing the entire Jewish community and inclusive about the message of Arlington not being a place for hate and in fact a place where we love, embrace, respect and stand up for our neighbors.

"It was amazing to see how large the crowd was and how many different faith leaders, community leaders and town officials were there. It was also an event that children and families attended, with opportunities to learn and express themselves; that was intentional and was so great to see in action. We hope the messaging of Love Lives Here in Arlington will carry to the wider community of all backgrounds, faiths and experiences."

Supporting the speakers' words were David Srebnick and Michael Paasche-Orlow, who led all in a series of Hebrew songs. They included "Ozi v'zimrat yah vay'hi li liy'shuah ...." "My Strength (balanced) with the Song of God will be My Salvation."

With the singing of "The People of Israel Live, Our Father Yet Lives," Bukiet joined the song leaders in an embrace,n acknowledging his father among the older rabbis.

The rhythms and harmonies engaged the overflow audience with an overflow of emotion.

A heavy downpour greeted those entering Town Hall. Soon after, the sun came out.

At a news conference at Arlington police headquarters Friday, May 17, officials announced rewards total $20,000 for information about two fires in town and another in Needham.

The office of state Fire Marshal Peter J. Ostroskey said it viewed all three fires in the two municipalities was intentionally set.

At the news conference, Flaherty said police could not yet say that all fires were connected, as she continued to appeal residents for help. She said that involved were the U.S. Bureau of Alcohol, Tobacco, Firearms and Explosives, the state Attorney General's Office and the Middlesex County district attorney.

The state Fire Marshal's Office has offered a $5,000 reward, and Robert Trestan of the Anti-Defamation League announced an additional $15,000. Those with information should contact the Arlington and Needham police departments.

Police and fire units responded to 129 Lake St. at 9 p.m. A police officer on patrol in the area arrived within about 30

The first fire occurred on Saturday May 11 at 11 p.m. Neither fire caused damage to the inside of the home.

Rabbi Avi Bukiet confirmed in a telephone interview Wednesday, May 15, that 129 Lake St. was the location of the fire.

To help pay for increased safety  at Center for Jewish Life, click here >>

The rabbi and his wife and three children live at the address.

A second suspicious outdoor fire in five days was reported late Thursday, May 16, at the Lake Street home that is also a synagogue.

Police have asked the public to help identify a person shown on surveillance video walking away from a home shortly after a suspicious outdoor fire broke out.

Anyone with information on this incident, or who recognizes the individual in the surveillance video, is asked to contact the Arlington Police Department at 781-643-1212.

After three months, the new exhibits are ready.…