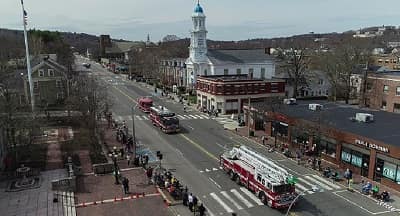 Using a drone while volunteering for ACMi, Cam Rogers shoots the 2019 Patriots Day parade from above. See more photos here >> | Watch the parade on ACMi >> 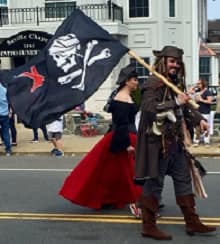 A pirate and lass take part in one of a series by Caitlin Smith of Arlington.

The annual event dating back perhaps a century followed the Arlington Boys and Girls Club 55th annual Fun Run, Jason Russell House tours, readings of Henry Wadsworth Longfellow's "Paul Revere's Ride" and Menotomy Battle reenactment. It was based on events that took place here during the British retreat on April 19, 1775.

The Jason Russell House, at Jason Street and Mass. Ave., held public tours before and after the reenactment, as guides pointed to interior walls still pocked by bullet holes from the battle that took place inside the house on the first day of the American Revolution.

Elias G. Katsos, a World War II Army veteran and Purple Heart Medal recipient, has been chosen by the Patriots Day Parade Committee and Veterans Council to be the 2019 grand marshal for the parade. His other military decorations include a European-African-Middle Eastern Theater Campaign Medal, World War II Victory Medal and a Good Conduct Medal. A lifelong Arlington resident, Katsos and his wife, Constantina, raised their four children in town. Katsos will be joined at the parade by his 9-year-old granddaughter, Alexandra "Lexi" Dorow, who has written a book chronicling her grandfather's military service. 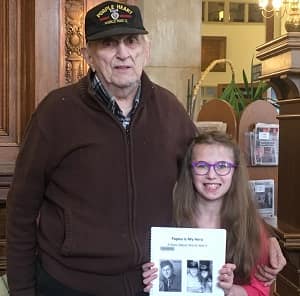 Alexandra (Lexi) Dorow with Elias G. Katsos, her grandfather, chosen by the Patriots Day Parade Committee and Veterans Council to be the 2019 grand marshal for the parade. Joining him at the parade will be Dorow, 9, who has written a book chronicling her grandfather's military service. / Town of Arlington photo

Many community groups will be marching in the parade, in addition to local and regional parade bands and entertainers.

Feb.-April: 2018 Patriots Day: No ride for Revere, Dawes, but parade goes on

Jan.-April 2017: How this year's Patriots Day Parade looked to me

April 18, 2016: Patriots Day Parade marches again after a year of