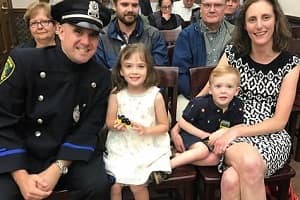 Officer Matt Riley (with his family) was recognized for aiding a man at Walden Pond. / Photo via APD twitter. See story below.

Selectmen were deadlocked on Monday, July 24, on whether to revoke Arlington Liquors’ license after the store failed an ID compliance check in March, selling alcohol to underage customers, and a decision on its license will be made at a later date.

Arlington Liquors has had several other recent violations. In March 2016, it failed a tobacco-compliance check, selling cigarettes to underage patrons. The previous month, store owner and manager, Alexander Kushnirsky, was found unresponsive and in possession of medical marijuana without a medical marijuana ID card while on the premises.

For these violations, in November 2016, Arlington Liquors was placed on a one-year probation. The terms stated that if the store committed another violation during this probationary period, it could be subject to a five-day suspension and/or additional sanctions. After the March violation, Arlington Liquors was closed for five days in June following a 3-2 vote June 19.

At Monday’s meeting, Kushnirsky was accompanied by his lawyer, William A. Kelley Jr., of Considine & Furey. Kelley said that Arlington Liquors’ five-day suspension was “sufficient punishment.”

The attorney said Kushnirsky “has enacted changes to his business,” such as new employee training and improved ID checking and “wants to show the board that he’s learned his lesson.”

A decision on Arlington Liquors’ license will be made at a later date, to be agreed upon by Selectmen Chairman Joseph Curro, Kelley and Town Counsel Doug Heim.

Mahon said, “I don’t believe the veracity of Mr. Kushnirsky’s ID checking, nor believe he “takes the situation seriously,” calling him “arrogant.” “I’m not willing to take him at his word anymore,” she added.

However, Byrne said he did not want to revoke the license. “It is appropriate to amend this penalty,” he said. “If I could, I’d vote to reconsider.”In June, the board voted to advise revocation, 3-2, with Greeley and Byrne voting no.

If the revocation is ordered, it would be the first such liquor-license action selectmen have taken in her memory, board administrator Marie Krepelka said in June. She has been at Town Hall since 1959. Arlington Liquors is at 94B Summer St.

Both restaurants will receive three-day suspensions for failing compliance checks in March. Representatives of each establishment has said it has since instituted improved training and ID-checking procedures.

Healthy eatery to open in Heights

A new breakfast café, The Granola Bowl Café, will soon open at 1346 Mass. Ave. The café will share the space with the artlounge Arlington, at the same address, when the art business is not in use.

The Granola Bowl Café will serve light breakfast items, including granola, yogurt, smoothies, fresh fruit, muffins, oatmeal and high-quality coffee and tea. The café can seat up to 19 people.

Police Officer Matthew Riley received a special proclamation from selectmen for saving an imperiled swimmer at Walden Pond in Concord.

While off-duty and enjoying time with his family on July 17, Riley took “swift and selfless action, relying on his training and experience to perform a lifesaving rescue of the endangered swimmer,” according to the proclamation.

Police Chief Fred Ryan said, “This was a real save. The victim had cramped up and gone under.”

The selectmen expressed their sincere gratitude for his heroic actions in answering the call of duty without regard for time or place.

After his proclamation was read, Riley received a standing ovation from those in the room.In recognition of his heroics that day, July 24 was designated “Matthew Riley Day” in Arlington.

Selectmen unanimously approved the Climate Change Pledge, an open letter from U.S. state, local, business, college and university leaders to the international community and parties to the Paris Agreement. The pledge states they are “joining forces for the first time to . . . continue to support climate action to meet the Paris Agreement.”

You can receive tax bills online

Arlington residents have the option of receiving their tax bills online. As part of the town’s tax-collection upgrades, taxpayers can receive paperless real estate and/or personal property tax bills.

The town saves money on printing and postage, and it is an eco-friendly alternative to paper bills.

Zoning Board of Appeals: Suzanne Spinney resigned. She is moving from Arlington this fall.