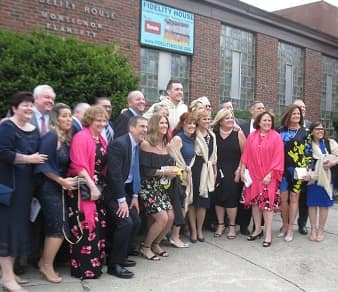 Pat Connaughton, surrounded in May 2019 by a wedding party, is the tall one in the middle. / Bob Sprague photo More photos >>

On Sept. 1, Connaughton brought the Larry O'Brien Championship Trophy to the Fidelity House, where he signed autographs and mingled with fans, according to a tweet from Arlington High School basketball coach Jack Woods.

Connaughton, a shooting guard for the Milwaukee Bucks, is going into his seventh season in the NBA and fourth in Milwaukee. He averaged 7 points and 4 rebounds in 23 playoff games last year, shooting 39 percent on 3-pointers. In the six-game Finals against the Phoenix Suns, he averaged 9 points, 6 rebounds and 1 assist, shooting 44 percent from 3.

A standout athlete at St. John's Prep in Danvers, Connaughton played basketball and baseball at Notre Dame. He was drafted into both the NBA and MLB and was under contract with the Baltimore Orioles through 2020.

The Bucks were the fifth team in NBA history to come back from a 2-0 deficit; the only other teams to climb that hill are the Cleveland Cavaliers, Miami Heat, Portland Trail Blazers and Boston Celtics.

In May 2019, Connaughton came to the town where he grew up on a gray Saturday afternoon and made himself available for autographs and photos to eager youngsters at Fidelity House.

First, though, some personal business: Outside, wedding celebrants, colorfully attired, poured out of St. Agnes Church. Among them was the bride, Krista Doherty, a lifelong friend of Pat's. Now Krista Jamieson, she joined well-wishers for photos with the 6-foot-5 NBA shooting guard.

The former star at St. John's Prep and Notre Dame was coming off a 14-point performance as the Milwaukee Bucks went up 2-1 in the series against Boston on May 3.

A Globe reporter asked Connaughton whether he had rooted for the Celtics when he was younger, but he "played coy and simply shrugged," the story says.

Inside, Fidelity House -- which has an ongoing capital campaign -- a line of kids, some bouncing basketballs, snakes around the gym. They approach the pro player, some with awe, some with feigned nonchalance.

Smiling, he signs photos, hats (one is green with a Bucks logo) and even basketballs. He poses for photos.

For a moment, a kid can hope that the magic from a player who ran the Garden parquet will rub off a little -- even if it was from "the enemy."

May 8, 2019: Connaughton appreciates roots: You can't buck a hometown hero

This news summary from partner Patch was published Friday, Sept. 3, 2021, and includes a May 2019 YourArlington report.

UPDATED, Oct. 9: Stroll down Mass. Ave. in Arlington Heights through October to enjoy 41…

UPDATED, Oct. 17: The grants committee of the…

"I Wanna Dance With Somebody," a biopic about the…

"A fall celebration and community gathering is…

UPDATED, Oct. 16: An open-air celebration of…

It's time to sign up for auditions for "Pippin"…

Visit the Robbins Library from 2 to 5 p.m. Sundays from…

Sitework for construction of new AHS: Through week of Oct. 25

Deadline Oct. 27 for feedback UPDATED, Oct. 19: The town is creating a housing plan to update…

Mugar: Most of it is the triangular tract west of Thorndike Field. / Google Earth UPDATED, Oct. 5:…

Redevelopment Board hears plans for Medford St. at Mass. Ave.

The Arlington Redevelopment Board on Monday, Sept. 27, in remote session, postponed a hearing for…

At police 'Peace and Pumpkins' held: Decorate in solidarity