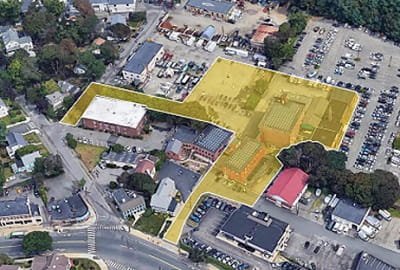 UPDATED, Sept. 6: The Zoning Board of Appeals voted Thursday, Sept. 2, 5-0, to support the 124-apartment project at Mirak in the Heights, the largest housing proposal since Town Meeting adopted town's master plan in 2015.

Read a summary of the Sept. 2 meeting by Steve Revilak, who is a ZBA member and offers his notes as a public service >>

The board deliberated on the 38-page documentfor 1165R Mass. Ave for two meetings.

Sept. 2 was two days before the 40-day period to render a decision was to end.

The proposal was was unveiled to the general public at the June 29, 2020, Select Board meeting.

Backed by the Mirak family, supporting the town's largest business and one with a history of giving back to Arlington, the initial proposal offered as many as 140 apartments, one-fourth of them described as affordable, behind the Heights car dealerships, amid town history and near the Minuteman Bikeway.

Mary Winstanley O'Connor, an attorney representing the project, said the Miraks will become the sole owners, similar to the Legacy apartments in the Center.

In June 2020, she said it has been designed with master plan in mind and includes access to a variety of transportation modes. Cyclists would reach the bikeway via new access connecting to Ryder Street.

The developers, Spaulding & Slye of Boston, asked the Select Board for a letter of support to be sent to MassHousing, which the board did.

Julia Mirak Kew, vice president at Mirak Properties, cited the family's history of generosity. Her grandfather John, after establishing automobile businesses in town in the 1930s, later helped move to the Center the Jefferson Cutter House, now home to the Dallin Art Museum and Chamber of Commerce.

Architect David Gamble, of Gamble Associates, touted how the plan manages open space and aims to fulfill the intent of the master plan. “This is a patient partnership with an experienced developer,” he said at the time, adding, "Density is not a four-letter word."

Architect Joel Bargmann, of Bargmann Hendrie + Archetype, described the project in detail, calling it "unlike any project we have ever worked on." See the presentation here >>

Daniel Sinclair, managing director of Spaulding & Slye, said he is “extremely excited to partner” on this project. He said the transportation plan shows a “very minor increase in traffic.” Current numbers, he said are 102 vehicle trips per day entering and 97 exiting. The projected numbers after project completion are 117 entering and 111 exiting. He called total traffic about 10 percent more.

About 45 neighbors of the extensive Mirak properties at 1165R Mass. Ave. had a first look at the plans on June 24.

The Select Board voted, 5-0, to accept the plan.

The spring 2015 Town Meeting adopted the current master plan. Thorndike Place, a 219-unit project on the 17-acre Mugar site, was announced in March 2015.

During citizen open forum, six people spoke about the project, three in support and others expressing development-related views.