Watch the concert on ACMi

The music tech program is led by John DiTomaso.

Presented were a variety of videos backed by music, produced, performed and/or written by students, as well as live instrumental and vocal performances from individuals and the high school's chorus group.

The evening began with Roberta Triscari playing “Divenire” by Ludovico Einaudi and “Doctor Gradus Ad Parnassum” by Debussy. The audience got to see each student's performance up close regardless of their seat, thanks to live multicamera shooting by ACMi's high school volunteers. That included using the balcony to capture a bird's-eye view of Aurélia LeHegaret, a senior at AHS, masterfully performing Linda Woods' piece “Two Guitars” on the harp; she had the full attention of the audience for her entire performance.

Will Bouck delivered an animated performance of “A Wonderful Day Like Today” from the 1964 musical “The Roar of the Greasepaint - The Smell of the Crowd,” Eli Young and Justin Stern performed “Alright” by Rachel Levy, with Young on vocals and guitar and Stern on the keyboard.

Olivia Morales, a junior, performed her first-ever original song “Let Go of You,” which she wrote and produced. Morales began writing the lyrics “years ago,” working on it periodically, and now sees it as reflecting how her “musical abilities, skills and confidence” have grown over the years.

The Combined Chorus, led by Mara Walker performed “When They Turuf,” produced by Aidan Chachkes, a medieval song remixed with a modern beat and partnered with some light-hearted choreography thanks to the chorus.

“Light of a Clear Blue Morning,” a song written and first performed by Dolly Parton, was performed by the AHS Madrigals, with a solo by Charlotte Olander. The trio of Maren White, Fiona Thomas and Bella Lauzon met with much applause.

The Concert Choir performed “Zum Gali Gali,'' an Israeli folk work song arranged by Victor Johnson, accompanied by percussion from Alex Ozarek. “Pines of the Rising Sun” a folk mash-up, which took two folk songs from very different eras and brought them together as one, was arranged by Sparrow Sheldon, a senior, and performed by the combined choirs. 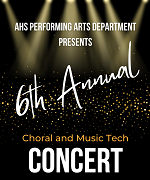 The choirs performed “Loch Lomond,” a Scottish folk song likely about “two of Bonnie Prince Charlie’s men, captured and left behind after the failed rising of 1745,” with soloists John Caradonna and Kieran Crowley.

Eva Banker created a video for her instrumental performance of Irving Berlin’s “Cheek to Cheek,” starring classmates and featuring local landmarks. Banker wanted to emphasize the belief that, “with so much seriousness in the world, it's important to 'let yourself go' on occasion and just dance.”

“Somewhere Out There” was written, performed, produced and animated by AHS student Colm Rigby. Complementing the song was an animated journey through hazy forests and otherworldly landscapes.

The Arctic Monkeys' song “505” was performed by Piper Segal and arranged by Regina Rossi and James Angell. “505” was chosen by Rossi and Angell because of “how timeless it is” and its “powerful climax.” It was their first time working together.

The music video was shot in Arlington and Somerville, specifically St. Agnes. Segal also performed, wrote and produced an original song titled “Rewind,” with a video reminiscent of a scrapbook, filled with pictures of friends and family. The song itself had a touching nostalgic feel.

“Running From the Truth'' was performed, produced and co-written by Segal and Brendan Biscan, with Angell on guitar and photography by Grace Biscan.

Mo Hagenbush and Cam Finney showcased their music video of “Body’s,”originally by Car Seat Headrest. They chose this song because of their admiration for the band's sound and also because it gave them “more opportunities to experiment with the mixing.”

Mazen Abukhalaf composed, produced, directed and shot the video for his original piece “Equinox” as well as “Reentry,” with a video animated by Simon Cheung. Both pieces were professional and compelling, as the music of “Reentry” furthered the narrative of Cheung's animation. Abukhalaf described “Equinox” as the second part of his “nature-music theme” and noted that this song was the first time he had incorporated a solo cello. “Reentry” is Cheung's and Abukhalaf's “first proof of concept for my ability to create fully original short films.”