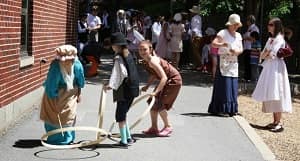 UPDATED, April 23: Third-grade Colonial Days are back in the news after Assistant Superintendent Roderick MacNeal Jr. reported to the School Committee at its April 12 meeting about decisions made by a group of administrators, elementary principals and selected parents. They decided to eliminate costumes and allow the third-grade teachers over the summer to refashion the event to encompass multicultural perspectives.

This decision was discussed in MacNeal's April 10 letter and a follow-up note two days latter. See both below. Reactions from committee members were supportive, but some in the public registered upset, as a group requested reconsideration of the plan.

School Committee members responded favorably to the assistant superintendent's decisions. Committee member Paul Schlichtman praised the work of MacNeal in bringing people together on this issue and noted that the Arlington community is becoming more and more diverse -- making the inclusion of multiple perspectives of even greater importance.

Chair Kirsi Allison-Ampe agreed with MacNeal's and the assembled group’s decision to eliminate costumes and revamp the event over the summer. Still, she worried about eliminating an event that has been a "highlight."  She remarked "on the genuine utility of this [event] as it engages the students."

This year, Colonial Days still are permitted to occur at a number of elementary schools -- just no costumes. The School Committee took no vote on the matter.

Three days later, in response to the assistant superintendent, a group of parents sent a letter to Superintendent Kathy Bodie and the School Committee objecting to the process used to craft proposed policy about the celebration and asking for reconsideration. The letter went further to argue that the celebration had great value to the students and to propose a few changes that might answer criticisms. Read the entire letter here >>

The complaint centered on the timing and composition of the decision-making group. The letter writers quoted Bodie promising a year ago to "convene a committee of parents, teachers, and administrators to exam Colonial Day as an event" last fall. But not until March were defenders of Colonial Days asked to share their thoughts with the school council. None was asked to attend the meeting with administrators, principals, teachers and a few parents to make a new policy on Colonial Day.

Timing was also problematic, they said: By March, it "did not allow enough time for all parties to be heard" before the celebration was to take place. Without adequate time for participation of all those concerned about Colonials Days, these parents worried that "it will breed resentment and create more division in Arlington." They expressed feelings of betrayal by the process that they charged "was not conducted in a public, honest manner."

The great value of Colonial Days, the parents asserted, was that "it offered one of the few immersion experiences available to our children." Unlike regular classroom work, students could assume the identity of a Colonial character who would attend an 18th-century school, make butter or candles, play 18th-century children's games, and participate in a trial based on Colonial practices. They reported that their children were both "engaged and enthralled" to enact daily life in Menotomy, as Arlington was known before 1807, and remembered it as one of the most meaning experiences in elementary school.

The letter responded to the criticism of wearing period costumes -- last year it was optional, and now would be prohibited in the proposed policy -- by reminding everyone that it was not required and costumes, in some cases, were provided free of charge by the schools or exchanged among families.

At a another level, the parents responded to charges concerning the name -- Colonial Days -- as having a negative connotation. They quoted one definition of "colonial" found in the Merriam-Webster Dictionary as "made or prevailing in America during the during the colonial period."

However, the parents acknowledged the legitimacy of some criticisms of the name and suggested possible changes: Menotomy Day or Living History Day. They wrote that they were also willing to discuss the concern about a sanitized version of history.

MacNeal's April 10 letter offered an alternative view from that of some parents about the focus of Colonial Days, one that emphasized including multiple experiences. In his letter, MacNeal informed parents "there will no longer be an expectation that students dressing up as colonists." Costumes, he maintained, are "problematic to our vision of creating an environment in which all students feel honored and welcomed."

He also found troubling that Colonial costumes "emphasizes a single perspective that was not shared by all of the cultures ... including Native American culture." He concluded that "our overall goal is to ensure all cultures are considered," which will be the project of the third-grade teachers as they revise Colonial Days this coming summer.

Yet a third set of objections to Colonial Days are articulated in a letter written by town resident Erik Pohl and sent to Bodie in May 2017 and just acquired by YourArlington. Citing his own experiences as a person of Native American and Scotch-Irish heritage with economically struggling parents, he argues that Colonial Days cannot be remedied by presenting multiple perspectives. Read Pohl's letter here >>

First, he points out that the costuming of students "highlights the income and leisure discrepancies in our communities." His parents had neither the money or leisure time to furnish him with a costume on Shakespeare Day in his school. He remembers how his parents tried to hide their shame. While Pohl agrees with MacNeal that costuming should be prohibited, he argues that is because of socioeconomic discrimination, not just lack of representation of all cultures.

His second point is that Colonial Days or similar events whitewash history. The history of the relationship between the early settlers of Arlington and the Massachusetts people was one of oppressor and oppressed. He states, "It doesn't take much digging at all to see that Arlington was the beneficiary of the destruction of the Massachusetts tribe."
He cites this history, provided by Menotomy Journal in 2005:

In 1639 Squaw Sachem was forced to deed over to white settlers much of present-day Arlington for little compensation. War and disease (brought by white settlers) had reduced her people to such a small number they could no longer defend themselves. The Massachusetts language and customs are now extinct.

What clearly distinguishes Pohl's point of view from MacNeal's is that Pohl posits that any depiction of Colonial Days should reveal the relationship among the peoples of that period and not just to "ensure all cultures are considered." From Pohl's perspective, the inclusion model described by MacNeal, obscures the dynamic of oppression between settlers and native peoples. Having a settler (with or without a costume), just stand next to a Native American (or play a game together) does not represent the social realities of that time.

This creates a conundrum for the organizers of Colonial Days. Trying to recreate this oppressive relationship in all its complexity for third graders would be difficult. But not to do so, in the words of Pohl, "whitewashes history and denies our community its actual past."

Finally, Pohl comes back to costumes. He is concerned that costumes "normalizes the whitewashed interpretation of history, even if countered by frank discussions." It does this by "enforcing a dilution of that history down to its lowest common denominator." He is suggesting that people are reduced to stereotypes of what people are thought to look like as opposed to revealing the true diversity among the settlers or Native Americans.

So far, three positions on Colonial Days have been presented -- one that likes it as it is, including costumes, but one willing to make some modifications, one that see the problem as one of inclusion of various cultures and one that points out that any recreation of Colonial Days must address the relationship between the settlers and the Native Americans (no mention of the people of color and African-American slaves who did exist in New England during the 18th century), which was clearly one of the oppressor and the oppressed.

To address the concerns brought up last year regarding Colonial Day, we recently held a meeting with third grade teachers and a separate parent forum. The purpose for each discussion was to examine how Colonial Day activities fit into the social studies curriculum and how it aligns with our goal of becoming culturally competent as a district.

The practice of having students dress up is problematic to our vision of creating an environment in which all students feel honored and welcomed. In addition, dressing up as colonists emphasizes a single perspective that was not shared by all of the cultures that were present during this time inhistory, which includes Native American culture.

This summer, our third grade teachers will be working to update curriculum to ensure that their instruction of the colonial time period is comprehensive and representative of all cultures. Their work will also revisit other aspects of Colonial Day, which may include selecting a different name and revising the activities that we currently have planned.  Our overall goal is to ensure all cultures are considered as we teach our students about important historical events and facts.

If you have any questions or concerns regarding the Colonial Day topic, please do not hesitate to contact me.

Follow-up note of April 12 from MacNeal

I would like to thank those of you who provided feedback to my letter regarding Colonial Day.  The majority of responses have been very positive and supportive.  A few people have asked me to clarify whether or not dressing up in colonial dress is optional.  Dressing up will no longer be a part of Colonial Day activities, therefore, colonial costumes are not optional this year.  As stated in the letter, we are moving toward the goal of becoming culturally competent as a district.

This news summary by Arlington freelancer Jo Anne Preston was published Tuesday, April 17, 2018, and updated April 23, to correct MacNeal's first name and to add a link.