Affordable housing at Downing Square gets Redevelopment Board OK 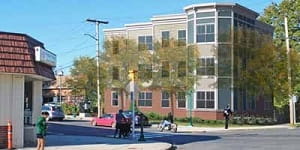 Balance of responses from among 40 residents

UPDATED: The Redevelopment Board voted, 4-0, on Monday, Dec. 5, to grant a special permit to the Housing Corporation of Arlington (HCA) for 34 units of affordable housing planned between Downing Square and the Minuteman Bikeway in Arlington Heights.

An estimated 40 people at Town Hall saw revised plans for the building across from Peter Pan, near the Mt. Gilboa neighborhood. Many of them expressed a variety of views -- from objection to support.

The two-building project, covering 32,000 square feet and having 23 parking spaces, must face scrutiny from the Conservation Commission.

Pam Hallett, HCA executive director, said the housing is for residents earning 60 percent of area median income, or about $43,000 annually for a single person, and that Arlington residents get a 70-percent preference for the units.

Board Chairman Andrew Bunnell said the vote had to be unanimous, because member Andrew West was absent, and the four members voted yes.

In doing so, they supported the second affordable-housing plan in two weeks. The first came Nov. 21, when the board backed the town's first key mixed-use project under bylaws that Town Meeting adopted last spring -- a special permit for 14 units of housing plus retail space at 117 Broadway, East Arlington.

The Dec. 5 vote comes as Hallett faces a Dec. 15 deadline so she can seek an estimated $19 million in financing for both projects by Dec. 15. The financing package links the projects so the nonprofit can get a better deal than if each was separate. 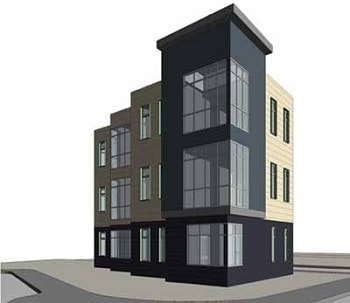 In the fourth public meeting about the housing proposal since October, comments from the audience about were balanced among supporters and detractors: Eight speakers offered words of support, seven had questions or criticism and the view of three could be characterized one way or the other. Comments were respectful.

Alexandra Rowell of Westminster Avenue left a pile of two pages of comments on a table on the Lyons Hearing Room. She suggested the project is outsized.

John J. Deyst Jr., a longtime Precinct 13 Town Meeting member, offered this quip. Referring to an earlier speaker, who called the project "a square peg in a round hole," he said: "The location right now is a hole." A number laughed.

On the other hand, Edward D. Trembley, a Precinct 19 Town Meeting member, asked the crowd how many had ridden bikes to the meeting. Two hands rose. He then asked: How many had taken the bus? Three hands went up.

He said plan proponents are asking half of the tenants to ride bikes or take public transit and that the 23 parking spaces are not enough. "I think there should be one parking space per unit," he said.

Laura Wiener, town housing director, said that by special permit in an R-7 zone, parking may be reduced to 25 percent of what is required. The bylaw, she said, permits 48 spaces, and one-fourth of that would be 12.

Later, Chris Loreti, a former member of the Redevelopment Board, questioned whether the bylaw language allows this reduction. He said he thought the board might be opening itself to a future appeal it supported the plan.

Other expressed strong support. They included Neal R. Mongold, an HCA board member, and Michael Vest of Medford Street who read a statement expressing how the HCA had helped his family.

In general, comments followed the patterns set at earlier meetings, with concerns expressed including traffic, project size and its appearance.

As to the latter, Paul Warkentin, an associate from Davis Square Architects, presented a fresh design for the building across from Peter Pan Superette. It increases the prominence of the corner unit, adds color and changes the window style, aiming to offer a more residential appearance. The rear of the building mirrors the look at the corner.

Davis Square Principal Clifford J. Boehmer discussed the results of studies showing how shadows from the new buildings would fall on neighborhood housing at various times of the year. His conclusion: The worst impact would be for a period on winter mornings, only on Lowell St. Place, and that building shadows would be less invasive than those from existing trees.

With regard to traffic, BCS Group of Boston responded to comments from the town's Transportation Advisory Committee (TAC) in a Dec. 1 memo.

Board member Dave Watson pointed to comments in the memo about a possible second exit/entrance for transportation on and to Park Avenue and asked about a safety issue for southbound drivers.

"I don't see this," said Howard Muise, chair of TAC. "A right turn safest you can make."

Among board members, Kin Lau said "the design has come a long way," and he suggested adding a walkway in the right-of-way between the housing site and the Citgo station.

Watson admitted he continued to struggle with look of the larger building. He wondered whether the architect could transfer some design changes made to the corner unit to the larger one.

The 4-0 vote proceeded on a Cayer's motion. A number of people in the audience applauded. Others remained silent.

This news summary was published Tuesday, Dec. 6, 2016, and updated that day.