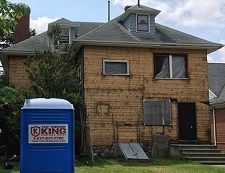 The Atwood house in July 2021 after the stop-work order was sent.

UPDATED, Aug. 5: The Arlington Historical Commission, hearing the case of the Atwood House demolition permit Tuesday, Aug. 3, voted to preserve the structure as a significant building and gave the owners one week to wrap the entire house in Tyvek and board all openings to seal it from the weather and prevent intrusion.

The AHC vote to preserve places a one-year moratorium on demolition, but by starting the process without permission, the owner triggered an additional one-year penalty under town bylaws.

The September AHC meeting is expected to provide further orders regarding the restoration of the exterior siding and the installation of windows.

The town board, established in 1970, aims to preserve and protect significant buildings within the town. The issue came before the commission after the town issued an order in early July stopping a demolition of the house at 821 Mass. Ave. that had begun before its application had been accepted.

The house, owned by Geoffrey Noyes of Marblehead, had fallen into disrepair in recent years, following a 2009 special permit by the Redevelopment Board, outlining what was to occur with the property.

Richard Duffy, a historian, provided context about the historical significance of the house in a statement: 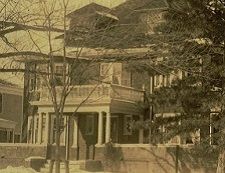 "Preservation of the historically and architecturally significant Dr. Charles Atwood House has always been important to the historical character of Massachusetts Avenue.

"When the now-defunct Hodgdon-Noyes Buick dealership planned to expand its automobile sales lot in the mid-2000s, the Atwood House was to have been moved to the western corner of Massachusetts Avenue and Mount Vernon Street, as the centerpiece of a residential development. The developer did not proceed, after which and the former Boston Federal Savings Bank site was taken over by Watertown Savings Bank for its Arlington branch.

"Then Hodgdon-Noyes Buick went out of business in 2008. An integral part of the CVS redevelopment of the automobile dealership site was the preservation and rehabilitation of the Atwood House, and numerous commitments were made in the special permit hearing process on behalf of Noyes Realty to preserve the house as part of the application package.

"The CVS was built, but the Atwood House was all-but-ignored. The house fulfills an important architectural role as a buffer between the First Baptist Church and the CVS building.

"Indeed, when the CVS building was proposed, it was determined that to top of its roof ridge would match that of the Atwood House, to ensure harmonious vertical scale.

"The Housing Corporation of Arlington was interested in rehabilitating the Atwood House to add to its inventory of affordable housing units; however, a land-lease agreement could not be reached with Noyes Realty. I am aware of no other substantive efforts to fulfill its historic preservation obligation under the special permit.

"For more than a decade now, the house has obviously been on the road to being demolished by neglect, until the recent unlawful active demolition activity began in July, for which it has been cited by the town."

Town resident Kristin Anderson, who watched the hearing on Zoom, wrote that the attorney representing Noyes, Robert Annese, cited the demolition contractor for miscommunication, tried to blame town officials for poor communication and claimed "his client was not given clear direction about what to do with the house and when to do it, going back to the time when he was permitted to have the CVS building."

Patricia Worden, a veteran Town Meeting member who has long been an advocate for housing in town, posted remarks to the Arlington email list on Aug. 3, which are quoted with her permission:

She quoted resident Don Seltzer, who wrote: “Ten plus years ago, when the Hogdon-Noyes car dealership was being replaced by the CVS store, the Housing Corp of Arlington was in serious negotiations to acquire use of the Atwood House for affordable housing. Mr Noyes turned down the offer, preferring to leave the house vacant and neglected for the next decade.”

She commented: "The Noyes family is a large landowner in Massachusetts and is the owner of the Atwood House. When the CVS was being approved the Housing Corporation of Arlington and the Arlington Housing Authority were very interested in renovating it for use as affordable housing ....

"David Levy (then Executive Director of the Housing Corporation of Arlington) created an excellent plan to proceed on this facility but the Noyes owners would not agree to a sufficiently long lease to allow the plan to work. And so this well built handsome house in its desirable location did not become affordable housing for anyone. Instead it was simply allowed to decay....

"John Atwood, grandson of Dr. Atwood (who owned the house and practiced there serving many Arlington patients during the pandemic of 1918) and my husband, John Worden (longtime historic preservation activist) were among those requesting corrective action. Indeed the attorney for Noyes (Robert Annese) promised them that the Atwood House would not be demolished."

Melanie Gilbert, who reports about the Arlington Housing Authority (AHA) for YourArlington notes that discussion of the Atwood House took place before the AHA board in early 2006. The minutes show that then board member John Griffin was trying to include the property in a plan to build housing for the developmentally disabled on the front lawn of Chestnut Manor.

At the time, she writes, Griffin was aggressively trying to expand the AHA's affordable units and had zeroed in on other developments, all of which he was urging to acquire through eminent domain. None of it, including the multimillion-dollar Chestnut plan, came to fruition.

This news summary was published Wednesday, Aug. 4, 2021. Freelancer Melanie Gilbert provided information for this report. It was updated Aug. 6, to add links to a 2019 news summary and the 2009 special permit.