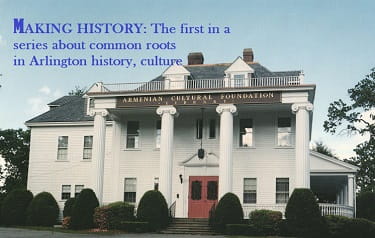 What's the story behind the magnificent building with the stately, white columns overlooking Mystic Lake near the town's border with Winchester?

The magisterial aura that the Armenian Cultural Foundation projects has its origins among two people with ordinary beginnings -- Vahan Topalian and John Mirak.

Let's take a look inside one of Arlington's best-kept secrets.

Based on foundation records and interviews, the story began with two immigrants. The first one, Topalian, emigrated here from western (Turkish) Armenia in 1905 at age 18. He assisted an Armenian tailor while receiving his education and later moved to Boston, where he worked at the Copley Plaza Hotel as a tailor and valet.

Daily, his hands worked with cloth, but his mind was on books and art -- and not just any that passed his fancy, but treasures, including volumes by authors who shaped Western civilization from the mid-18th century on.

Over his quarter century in downtown Boston, Topalian appears to have haunted every area book shop and auction in pursuit of rare finds. His collector's trove amounted to an estimated 25,000 volumes before he died in 1983 at age 97.

Those works are part of a collection estimated at twice that size housed at the cultural foundation, at 441 Mystic St.

Make an appointment, and there you see 52 volumes by French philosopher Voltaire and the complete works of American poet Edgar Allen Poe. In concert with the foundation's mission -- to preserve and venerate Armenian culture -- you will also find the world's broadest collection of Armenian newspapers as well as the largest collection of musical scores and other materials of the renown Armenian composer Alan Hovhaness, a 1927 Arlington High graduate, and displays focusing on women's issues.

From tailor to curator

How did an ordinary tailor with an extraordinary passion for the life of the mind become a cultural curator?

Some history: The foundation's first home was 18 Somerset St., on Beacon Hill. The handsome five-story brownstone, on the site of a college dorm, was remodeled as a library and opened in 1947, where it remained for 14 years. Then the state took over the address via eminent domain.

Enter the "other orphan," John Mirak. His name is known to generations in town for selling cars and developing real estate. The family name likely should be equally known for works of generosity.

A child survivor of the Armenian Genocide of 1915, Mirak settled in Arlington and began building his businesses in the mid-1930s. By 1961, Topalian and his trustees, "babes in the woods" in business matters, approached him for help.

"My father," Bob Mirak, John's eldest son, said in an interview, "was no babe in the woods and was willing to listen to Topalian. However, when the elder gentleman asked my father to become president of the foundation and help with the lawsuit, my father resisted," pleading family and business demands.

Resolved not to take the post, John Mirak was told a few days later by Topalian's lawyer that he had been elected unanimously as president of the Armenian Cultural Foundation and needed to appear in court against the Commonwealth. Thus began nearly 40 years of devotion to the foundation and to Topalian.

John Mirak helped Topalian put the foundation's contents into storage and search for a new location. In a few years he settled on 441 Mystic, a family residence. According to local historian Richard Duffy, the building was constructed in 1895 as a Queen Anne Revival. It remained as such until the mid-1920s, when its new owner, a prominent real estate developer, transformed it by removing its Queen Anne turret and adding four massive columns to its facade. The building remained that way until the 1960s, when the foundation moved in.

For John Mirak, the building needed a grand way to showcase its literary and artistic treasures. Thus, he hired noted local architect Jerome Bailey Foster to design what has become a Great Hall at the rear of the building. Measuring 33 feet wide, 62 feet long and 12 feet high, the voluminous room encompasses original elements: 22 stained-glass windows and 50 oak barrister bookcases. Portraits of famous literary figures peer from the walls. Across the floor spreads a massive Khorassan Persian rug.

On a recent tour, led by curator Ara Gharazaians, the viewer's eye explored the hall with wonder, falling at last on Mystic Lake beyond.

Affixed to the foyer wall, a marble plaque rededicates the library to one of Topalian's heroes -- Eghia Demirjibashian. Like that late-19th-century Armenian mystic, writer, editor and poet, Topalian mixed scholarship and eccentricity. A freethinker, he held radical ideas -- he knew socialists Emma Goldman and Alexander Beekman -- and he wore a cross in his lapel upside-down, to proclaim that God was dead.

Apart from his foundation benefactors, Bob Mirak reported, he gave short shrift to wealthy Armenians. Once, when two Armenians of means questioned why he spent his time with books and the classics, Topalian retorted: "I would rather ride in a chariot with Aristotle and Plato than in a Cadillac with jackasses like you."

That salty language was not directed at his chief donor, John Mirak. Concerned about the safety of its treasures, the two former orphans shielded the foundation from the general public throughout their lives.

The foundation is open from 9 a.m. to noon Monday through Thursday by appointment. Interested individuals should call its curator at 781-646-3090.

In keeping with the new initiatives, the board dedicated a sumptuous second-floor room to Armenian music. Named for the great 20th-century musicologist and priest, Gomidas Vartabed (1869-1935). It featured a photo of the Persian-born composer and conductor Reuben Gregorian (1915-1991) shaking hands with the Shah of Iran. Armenian women's issues were also recognized by collaborating with the Armenian International Women's Association.

The board also continued the foundation's original mission by sponsoring lectures and exhibits on Armenian history. Among these were a 2004 exhibit devoted to the career of Diana Agabeg Apcar (1859-1927), Armenia's first female diplomat, and a 2018 celebration of the life of illustrious Armenian-American poet Diana Der Hovannesian.

Notable books numbering an even dozen were also edited and published, including most recently, President Calvin Coolidge and the Armenian Orphan Rug (2013) by Dr. Martin Deranian. Scholarly receptions for dignitaries from Armenia and elsewhere were also held in the Great Hall.

This news feature was published Wednesday, Jan. 1, 20209. It is part one of an occasional series called "Making History," focusing on specific cultural institutions in Arlington.