The smell of gas is unwelcome in Arlington neighborhoods, yet its noxious scent has persisted for years, and a task force has worked for more than two years to try to make sure that the town does not face blasts like those that rocked the Merrimack Valley.

On Sept. 13, 2018, excessive pressure in natural gas lines owned by Columbia Gas of Massachusetts caused a series of explosions and fires in as many as 40 homes, with more than 80 fires, in the towns of Lawrence, Andover and North Andover. One person was killed and 30,000 were forced to evacuate their homes.

Arlington has faced no such mayhem, but leaking gas continues to provide foul reminders of what could occur.

The Arlington Town Manager’s Gas Leaks Task Force, formed at the end of 2017, aims to improve the dialogue with National Grid regarding the repair of leaks to mitigate various environmental- and public-health-related impacts.

Ann Boland of Arlington, who coordinates task-force meetings, provided the number of unrepaired gas leaks in town – 313 at the end of 2018, the most recent count, according to National Grid and Department of Public Utilities figures. She noted that independent researchers have found that 1 1/2 to 3 times as many leaks as utilities report.

Here is a map from Mothers Out Front showing leak locations >>

“The number of leaks is growing, despite our gas utility’s claim that it is on top of the problem,” Boland told YourArlington. “At the end of 2017, Arlington had 234 unrepaired leaks. There has been at least 33-percent rise in the number of unrepaired gas leaks in Arlington in just one year.”

Numbers for 2019 are not yet available.

Boland cites one reason for the leaks: Arlington has approximately 120 miles of gas-distribution mains. In the light of the age of the system, about 77 miles of the pipe are considered leak prone, because it is cast or wrought iron.

The state requires utilities to repair these leaks within two to three years of receiving the designation as having significant environmental impact, but the list of unrepaired leaks includes some going back far longer than two years.

The specific addresses of environmentally significant gas leaks in Arlington provided by the task force are:

Mass. Ave. is included on the list, but no specific address has been provided.

Asked for the group's key accomplishments, Boland said they include:

1. Adding information to the town website to educate Arlington residents about the dangers of methane gas and what to do if you smell a leak.

2. Arranging for the DPW to work more closely with the gas company for more efficient use of resources, minimize disruption of traffic and residents when gas leaks are being fixed.

3. Purchasing a gas-sensing tool for the Arlington tree warden to use when planting new trees. In the long run, this saves money. If gas is detected, a tree will not be planted in that location.

5. Working with Mothers Out Front tagging of Arlington’s gas leaks in 2016 and 2018 to involve community members and increase public awareness of the problem.

6. Ongoing effort to speed up the rate of repair of gas leaks, especially those that are environmentally significant.

“Overall, there’s been a lot of talk but very little action,” said Nathan Phillips, a Boston University professor, lead author of “Rolling the Dice, ” a study on the gas system in Massachusetts. “What happened in the Merrimack Valley could happen in any city or town in the commonwealth. There are still clear and present dangers.” Phillips was quoted in “Report: Gas system's flaws put public at risk” by Christian M. Wade, in the September 13, 2019, issue of The Salem News.

That utility prioritizes leaks by safety level, with some leaks getting immediate attention, while others may take years to repair. Boland said these nonhazardous gas leaks have environmental implications if prolonged for trees and because natural gas is 95 percent methane, a potent greenhouse gas contributing to climate change.

Gas leaks have been traditionally classified as:

Grade 1: Must be responded to immediately because they pose an immediate danger.

Grade 2: are nonhazardous leaks but have the potential to become hazardous. They are to be repaired within 12 months of classification.

Grade 3: is considered nonhazardous and is not expected to become hazardous. These are the lowest priority for repair. Some of these leaks have existed for decades.

A newer classification is grade 3 SEI, which stands for significant environmental impact. These are grade 3 leaks that emit a large volume of gas. These leaks are about 7 percent of all leaks yet, they emit about 50 percent of all leaked gas.

The task force includes representation from DPW (Engineering and Tree Division), Sustainable Arlington, the Tree Committee and Mothers Out Front. 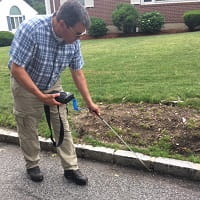 It has a probe and it will give an audible and visual signal when it detects gas. See more here >>

The warden and his crew use this when deciding where to plant new trees.

If there is natural gas in the soil, it replaces the oxygen that the trees need and the tree will die.