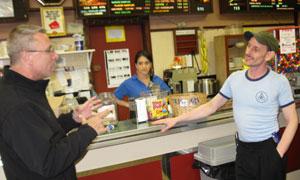 Brigham co-owner John Mercer, right, chats with a customer on May 4 after reopening.

With more than $92,000 in back taxes owed, the state closed the last Brigham's in greater Boston on Tuesday, May 1, but it reopened three days later after its owners worked out a payment plan, avoiding auction of the Heights store.

Owners Steve Kupelnick and John Mercer, both of Arlington, said in an interview that they persuaded the state Department of Revenue that they could make a significant down payment and repay the $92,387 owed since, according to a DOR representative.

The co-owners dispute the amount of back taxes owed and say they owe "thirty-something-thousand."

At 1:40 p.m. Friday, two staffers, two reporters and two customers were in the shop, along with the owners, who had opened at 11 that morning. Later, another customer came in and bought a cup of ice cream with hot fudge, regaling all present about the wonders of the warm dark liquid.

"I drove all the way to Taunton yesterday," he said, hoping to get Brigham's fudge for a friend who is ill."

As Kupelnic answered reporters' questions in a booth, his partner weighed in with a nearly nonstop monologue, which ranged from the closing of the Belmont store in January after 80 years to the lengths the partners took to make a deal with the state.

He said getting the money involved borrowing on a house and life insurance.

On the table of the booth where Mercer spoke were rolls of pennies.

They said they opened the Belmont store in 2001 and became franchise owners of the Heights' store in April 2001.

Kupelnick talked about the joys of serving ice cream. He called it "happy food."

On average, the DOR seizes from 60 to 80 businesses a year for delinquent tax payments, and about 25 to 30 percent of them go to auction. For now, this store does not appear to be among the latter.

At its height, Brigham's had more than 100 restaurants across New England. Founded in 1914 by Edward L. Brigham in Newton, the company in 1968 purchased Buttrick's in Arlington. Brigham's corporate headquarters remained on Mill Street until 2008, when the site was sold, and condos are under construction there now.

The groundbreaking for a 116-unit apartment community is expected to occur this month at the site of the former Brigham's Ice Cream headquarters, factory and restaurant after Wood Partners of Atlanta bought the site for $5.568 million.

For more about the Heights' Brigham's, see the May 3 Boston.com and an update May 4.