News: Oz, McCormick locked in tight race in high-stakes
Pennsylvania GOP primary that could shape control of the Senate

A 'pharmacist of the eyes' sees way forward 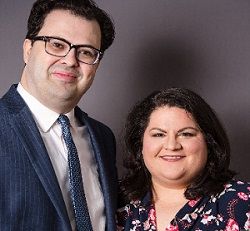 Adam Estapa had already passed two exams needed to become a licensed optician when he was stymied by the third: It was on paper, and he had to fill in little bubbles to show his answers. The problem was he couldn't see them very well.

Estapa, 41, is legally blind. The earlier exams were on the computer, where he could enlarge those omnipresent exam bubbles.

But this test? The testers said no. He got a 35 and failed.

So he challenged the testing protocols and, with the help of the American Board of Opticianry was able to take the final test on the computer. He passed. Easily.

Now he is the only legally blind optician in Massachusetts, he says.

He and his wife, Rachel Estapa, opened Perception Optical at 60 Mass. Ave. in May 2020, two months after Covid hit town.

While they have a range of clients, they especially enjoy helping people with low vision since Adam is well aware of some of their stumbling blocks.

Having a disability means I know something about what it takes. I’ve been to places that couldn’t handle my prescription.”     -- Adam Estapa

“Having a disability means I know something about what it takes,” he said in a recent interview. “I’ve been to places that couldn’t handle my prescription.”

An optician, he said, is the pharmacist of the eyes. Once there is a prescription, it’s up to the optician to determine what kind of frame will best fit the patient. “We make the measurements for the frames; we look at posture and how people are using their glasses.”

One patient had had a stroke and couldn’t lift his head all the way up. Adam said he got down on his knees to see how the man would be using his glasses.

Estapa’s own vision is 20/200. He has Stargardt’s disease, a  genetic disorder that can result in  a range of problems. For Estapa, it means he has partial color blindness, is sensitive to light and has macular dystrophy so that his peripheral vision is better than his central vision.

“I’ve been wearing glasses since I was 13 months old,” he said. “Glasses were my life, and I couldn’t live without glasses. It’s how you laugh, smile, see your friends. Eighty-three percent of  perception in your daily life is through vision.”

He grew up in Bexley, Ohio. His mother took a job near his school at an optician’s office, where she worked as a secretary. She decided to become an optician herself, and, as a teenager, Adam worked in her office, doing everything from answering phones to using the lensometer to verify prescriptions.

He decided to follow in her footsteps and earned a degree from the Benjamin Franklin School of Technology, in Boston.

His own experiences as a patient and later as a job hunter help him understand the challenges faced by people with disabilities. Once, when he was at an optician’s office to get new glasses, he explained he needed a particular tint for his clip-ons. He was told, “Your glasses look fine to me.” He explained his sensitivity to light and was told, basically, “too bad -- there’s only one tint.”

In his own practice, he tries to listen to people's needs: the elderly woman who needs glasses to play bingo; another who told him she enjoys knitting, crosswords and her bridge game. “I said, ‘Let me see how you hold your cards.’ It takes a tailor to see how the dress or the suit fits.”

An MBTA driver told him he was having trouble seeing the lights in the subway tunnels and had to stick his head outside the cab to see them.  Estapa said he found a tint for his glasses that made all the difference.

In addition to helping people with disabilities, Adam and his wife, Rachel, who is the operations manager for the business,want to make sure everyone has good choices for frames. They carry the complete line of frames made for people with larger faces from a Dallas manufacturer. Rachel  said people with larger bodies “are very moved when they see this collection, because they don’t have to settle for one or two choices or the women have to choose from men's frames

Rachel is herself an entrepreneur, with a business called More to Love, which includes yoga for plus-size people. She makes videos and gives presentations about body awareness. And is eager to help customers find the right-size glass frames.

“We want to be like a concierge,” said Rachel, “and provide one-to-one help. We want glasses to complement your life.”

The Arlington Chamber of Commerce announcements: Join us for the complimentary Small Business…

Panels in the 57-year-old building 'dated.'-- Jack Nagle The Arlington Housing Authority (AHA) in a…

Tony and Jeff Whittemore head for Montreal. / 1967 family photo UPDATED April 29: In 1967 two young boys and their beloved pony took off on a monthlong adventure that brought them fame, fun and a wealth of great stories. Tony Whittemore, 11 at the time, and his brother Jeff, 9, drove a pony cart…

Preview of panels featured in the Dallin Museum’s…

Construction of new AHS: Through week of May 16

Housing authority board to meet Thursday