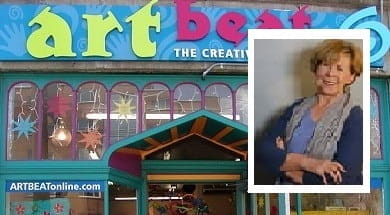 “It wasn’t an easy decision, because this is a really fun and fulfilling business,” she said of the Halloween surprise. “But now it’s time for me to stop running a retail store and to listen for what’s next in my creative life.”

Artbeat is holding an inventory-liquidation sale, which began Saturday, Nov. 2, offering customers 25 to 75 percent off every item in the store, including art supplies, kits, toys and gifts that promote creativity.

The sale will last until all is sold. "With the holidays coming up, we recommend people shop early to ensure they get what they want, as we won't be reordering," she wrote. She clarified that this is not a clearance sale of old merchandise. Most of the inventory is new, brought in specifically for the holidays.

The Artbeat Studio will continue to operate during the closing sale, but with limited seating. All wood and papier-mâché surfaces will be discounted, while studio fees will remain the same.

The store's most popular projects are available, so the publc can still make great holiday gifts. All other materials are available – and discounted – for at-home projects.

Artbeat continues doing birthday parties during the sale and into the future. Earlier this year, it began partnering with the Arlington Center for the Arts and holding our birthday parties in its new space. Just email or call to leave a message.

Whitted opened Artbeat in 1996 after careers in telecommunications and printing. At the time, she still had children at home and was frustrated with the lack of resources for ways enjoy art materials with her children.

“My vision was to have a place where you could try out different art materials and then take home what you loved, instead of signing up for multisession classes or buying supplies you might never use again,” she said.

Over time, the store grew to be a source for hard-to-find art and craft supplies and an eclectic mix of creative kits, sensory toys and inspirational gifts. Paired with an on-site studio, Artbeat came to be a favorite destination for Arlington families. The studio will continue to operate during and after the retail-store closing sale.

While growing her business Whitted also took time to build a collaboration with neighboring businesses in order to promote the East Arlington business district. That collaboration became Capitol Square.

“We were neighbors coming together to make something larger for the community,” Whitted explained, “and the community responded by supporting us and making Capitol Square an even more enriching place to be.”

Asked to detail what comes next, Whitted wrote: "I have lots of ideas I'd like to pursue and running a retail store is an intense commitment of time and resources. I have loved doing it, but I need to stop in order to provide those other ideas the room they need to grow. Continuing running my studio is part of that effort.

As to why she is closing, she her reasons are personal, but "it can't be emphasized enough how much local independent retail stores need everyone's support in order to thrive the way we all want them to. Brick-and-mortar stores are faced with rising costs on all fronts and heavy competition from online sales. We need only imagine what Main Street would look like if our local retailers were gone. We need to actively build the world we want."

Brick-and-mortar stores are faced with rising costs on all fronts and heavy competition from online sales. We need only imagine what Main Street would look like if our local retailers were gone. We need to actively build the world we want.

She cited some personal history. "As you know from my appearance in the documentary "Left On Pearl," I was part of an antiwar printing collective in my early adult life, and then became a letterpress printer.

"In 1982, I was hired by Tufts University to manage its printing department and to start up an on-campus copy center. I accomplished that quickly, so then I was tasked with solving a problem with the university's newly acquired computerized telephone system. (This was just following the ATT divestiture, which had thrown that world into turmoil.)"

She knew nothing about computers at the time, but she was able to solve the problem and then went on to establish the university's telecommunications department, which she headed until leaving the university in 1996 to start Artbeat.

Whitted was born in San Diego, grew up just outside Philadelphia, went to college in Chicago and moved to Boston in 1968. She has been a longtime Cambridge resident. At 71, she lives in North Cambridge, just across the Arlington line, and came to town to shop and dine for many years before situating her business at 212A Mass. Ave., in East Arlington, in the same block as the Capitol Theatre.

UPDATED, Oct. 9: Stroll down Mass. Ave. in Arlington Heights through October to enjoy 41…

UPDATED, Oct. 17: The grants committee of the…

"I Wanna Dance With Somebody," a biopic about the…

"A fall celebration and community gathering is…

UPDATED, Oct. 16: An open-air celebration of…

It's time to sign up for auditions for "Pippin"…

Visit the Robbins Library from 2 to 5 p.m. Sundays from…

Sitework for construction of new AHS: Through week of Oct. 25

Deadline Oct. 27 for feedback UPDATED, Oct. 19: The town is creating a housing plan to update…

Mugar: Most of it is the triangular tract west of Thorndike Field. / Google Earth UPDATED, Oct. 5:…

Redevelopment Board hears plans for Medford St. at Mass. Ave.

The Arlington Redevelopment Board on Monday, Sept. 27, in remote session, postponed a hearing for…

At police 'Peace and Pumpkins' held: Decorate in solidarity