Animal-control officer back on job after leave 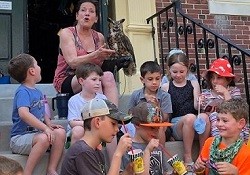 Diane Welch informs youngsters about an owl at Spring Fling in May.

Residents say Welch now works at the community center, not the Police Department. Flaherty and Christine Bongiorno, head of human services, have been asked to confirm these claims and to explain the reason for the changes.

Because this is a personnel matter, officials to date have declined to spell out the reasons for the leave or for the return. Welch has declined to comment for publication.

The issue went live on social media on July 8, when some posters claimed without evidence that Welch, a popular figure in Arlington, had been fired or had been laid off. Both were untrue.

Flaherty, who had been on vacation at the time, confirmed July 18 that Welch had been put on paid administrative leave.

Rosalind Shaw, an Arlington resident, shared a letter to the editor of YourArlington that appears to express some of the views of many in town. It said, in part:

“For as long as she has been in Arlington Police Department, Officer Welch has been a stellar ACO. Arlington’s residents love her for the combination of knowledge, skill, courage, compassion and integrity she brings to her complex job ....

“I hope that APD can work with her to remedy any issues they have seen with compassion and without double standards .... Diane Welch is a treasure who deserves the full support of APD—financial, administrative and technical. And we, the residents of Arlington, deserve the kind of ACO she is.”

The issue reemerged on the Arlington email list Sept. 12, when a resident asked for an update about the matter.

Select Board member Diane Mahon reported that Town Manager Sandy Pooler had told her that Welch "has returned to duty and will receive animal calls through Police Dispatch. She will start taking animal calls this week."