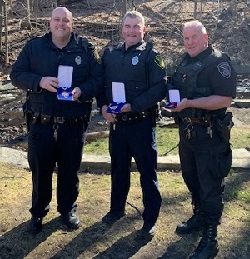 On Jan. 22, a two-alarm fire broke out at the Chestnut Manor senior housing complex, killing one person and displacing 16.

A day later, emergency crews pulled three people from Spy Pond who had fallen through the ice.

"Thank you all for a job well done!" the Arlington Police Department said in a statement, first reported by YourAlington partner Patch.