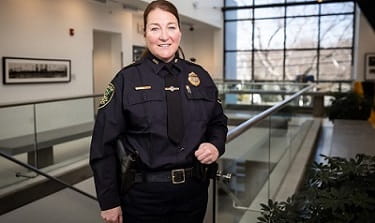 The town's first female police chief knows her place -- that is, the place her forces oversee -- Arlington. She grew up in town, on Milton Street, and has lived here most her life.

But since the coronavirus took the world by the throat, it has changed all it touches, including every corner of the town. In an interview with YourArlington after the crisis gripped us, Chief Juliann M. Flaherty discussed its impact on her officers.

"Apart from masks and gloves, this is the same department that Arlington has known for years," she said, adding that it is carrying out its duties in the face of disease-ravaged adversity.

The mission of the force remains unchanged, even if much else has.

Since restrictions in town took effect March 13, incidents involving vehicles have dropped. On the other hand, crime has increased, as have calls from the public, among them reports of substance use. Rebecca Wolfe, the department's social worker, has been busy.

Town residents stay as safe as they can -- through isolation and distancing -- but what about our police officers, who are among the essential first responders?

None has been ill with Covid-19, the chief says. Should the disease hit the force, Flaherty says she has an emergency plan under which officers would work 12-hour shifts.

No need for that yet, as total force of 81 sworn officers and civilian personnel follow protocols: masks and gloves in public (officer may choose what to wear in squad cars).

But what do such protections mean for officers –- who are “there 24/7 for the community,” Flaherty says -- when they respond to routine calls, reshaped by the coronavirus? A knock on a door means meeting those that officers likely have not seen before face to face.

The rest of us keep our distance. What do police do? They ask residents to step outside. There, parties can keep six feet apart.

Of course, some police work is far from routine, as officers step into situations that amount to forcing strangers into the unknown.

To try to minimize these encounters, officers are asking residents who call police to use the department's online reporting system. Police will then follow up. Read information about what to do here >>

Many residents now work at home. Those sworn to protect public safety cannot. Officer must go to headquarters on Mystic Street for a variety of reasons, though not for a daily roll call, as in the past.  Flaherty said they are not encouraged to stay inside. Asked to wear masks in the building, they are advised to limit their time there. Community policing means getting out into the public eye.

Sometimes it's not a choice. What if teens have broken through the fence surrounding a locked Peirce Field, as has happened a number of times during the crisis, and they are playing soccer or exercising in close quarters? Police drive over and require them to leave.

These are among the calls to the Mystic Street headquarters that the crisis has spurred here since restrictions began. As other jurisdictions are reporting drop-off in crime, what is Arlington experiencing?

Between March 14 and April 14, reported crime has increased a little over 17 percent. The numbers are 68 in that period this year compared to 58 in the same month in 2019.

Along with enforcement comes explanation, if the opportunity is present: Basically, the chief said, officers try to educate about social distancing and aim to have a positive effect.

Asked whether the department is getting different kinds of phone calls from the public than occurred before the outbreak, she said a number come from concerned citizens who worry about groups of young people walking or gathering.

More serious calls come in -- those reporting overdoses mental-health issues or domestic abuse. The chief called the rate of those calls "an uptick." (If you have experienced such issues, read here >>)

Further, traffic accidents have dropped since public restrictions began. During the monthlong period compared, 31 traffic crashes/collisions were recorded in 2019, and just six in 2020.

Overall, she said, the force is doing a very good job addressing the challenges the coronavirus has visited upon Arlington. "Everyone has rallied together," she said, aiming to do the best best for the community."

This news feature was published Wednesday, April 22. Next: Earlier challenges, to be published soon.