News: Oz, McCormick locked in tight race in high-stakes
Pennsylvania GOP primary that could shape control of the Senate 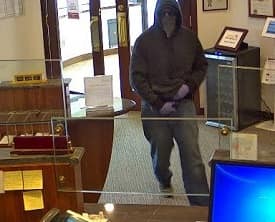 On arrival, a news release said, officers initiated an on-scene investigation and were informed that a male suspect, shown in police photo, had walked into the building and shown a black handgun and demanded money. The suspect fled on foot with a quantity of cash.

The suspect is described as a white male with a thin build, about 5-foot-8 to -10. He was wearing a black mask, black hooded sweatshirt, purple rubber gloves, baggy blue jeans and gray sneakers.

If anyone has any information on this bank robbery or recognizes the suspect seen in the surveillance photos, he or she is asked to contact the Arlington Police Department at 781-643-1212.

The scene remains active at this time. Additional updates will be given as information becomes available, said Julie Flaherty, the acting police chief.

In April, the same bank was hit by a man in a hood who passed a note to a teller demanding money. No weapon was shown, a news release from the department's public-relations firm said.

The man then fled with an undetermined amount of cash, heading toward Somerville.

The Arlington Chamber of Commerce announcements: Join us for the complimentary Small Business…

Panels in the 57-year-old building 'dated.'-- Jack Nagle The Arlington Housing Authority (AHA) in a…

Tony and Jeff Whittemore head for Montreal. / 1967 family photo UPDATED April 29: In 1967 two young boys and their beloved pony took off on a monthlong adventure that brought them fame, fun and a wealth of great stories. Tony Whittemore, 11 at the time, and his brother Jeff, 9, drove a pony cart…

Preview of panels featured in the Dallin Museum’s…

Construction of new AHS: Through week of May 16

Housing authority board to meet Thursday