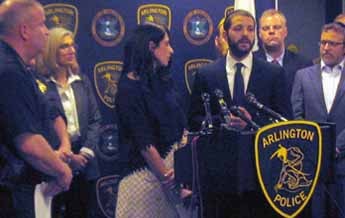 UPDATED, Aug. 7: Federal and state authorities have joined Arlington and Needham police in investigating three fires at homes used for Jewish services. The state fire marshal is calling them arson.

At a news conference at Arlington police headquarters Friday, May 17, officials announced rewards total $20,000 for information about two fires in town and another in Needham. That was an amount offered by groups supporting Jews and Muslims, Universal Hub reported.

A group of rabbis and Jewish leaders joined town and state officials to express support for Jewish congregations.

Acting Police Chief Juliann Flaherty called the two outside fires at 129 Lake St., a family's home and the Chabad Center for Jewish Life of Arlington and Belmont, a "direct assault on our community." A full-time officer is on patrol near the home.

Needham police reported a third suspicious fire had broken out about 10 p.m Thursday, May 16, at the Chabad Jewish Center on High Rock Street, about an an hour after Rabbi Avi Bukiet’s house was targeted for the second time.

The office of state Fire Marshal Peter J. Ostroskey said it viewed all three fires in the two municipalities was intentionally set.

At the news conference, Flaherty said police could not yet say that all fires were connected, as she continued to appeal residents for help. She said that involved were the U.S. Bureau of Alcohol, Tobacco, Firearms and Explosives, the state Attorney General's Office and the Middlesex County district attorney.

More than 500 at Town Hall More than 500 people were estimated at a solidarity gathering for the Center for Jewish Life of Arlington/Belmont, twice hit by suspicious fires this month. It was held after 6 p.m. Monday, May 20, at Town Hall. The hall was full, as were the balconies. Many stood.

The host is the town's Human Rights Commission. This gathering is in support and solidarity for the Jewish community and to empower each of us to take action against all acts of hate, bias and discrimination.

The state Fire Marshal's Office has offered a $5,000 reward, and Robert Trestan of the Anti-Defamation League announced an additional $15,000. Those with information should contact the Arlington and Needham police departments.

David Swanson, cochair of the Arlington Human Rights Commission, said the group stands behind the rabbi and his family "as one of us." The group is expected announce a vigil soon.

Needham Police Chief John Schlittler noted the fire in town and said he was working to see whether it is related. The Needham number to call is 781-444-1212.

Rabbi Bukiet praised the support he has felt from Arlington "from the get-go" and said the "outpouring of love" was "overwhelming." Surrounded by rabbis from the Boston suburbs, he called the fires "an anomaly," one that targeted not just a place of worship but a family.

Arlington is where he wants to be, he said, and called a place to thrive. "Our message is and will always be open doors” at the center for anyone wishing to study Judaism. "We will forever hold that message up to the community around us. We will persevere with their help, and with God’s help."

His wife, Luna, said, she was guided by "light and love ... we will double down."

State Sen. Cindy Friedman (D-Arlington) applauded the Arlington police for its response. She added her 100-percent support to the rabbi and his wife.

BostonGlobe.com reported that 58 cities and towns in Massachusetts reported at least one anti-Semitic incident last year, and Massachusetts had the fourth-highest number of incidents per state in the country (144), following California (341), New York (340) and New Jersey (200), according to an ADL statement.

The news conference was set up in advance as one in which statements were presented and no reporters' questions were taken.

A second suspicious outdoor fire in five days was reported late Thursday, May 16, at the Lake Street home that is also a synagogue.

Police and fire units responded to 129 Lake St. at 9 p.m. A police officer on patrol in the area arrived within about 30 seconds of the initial call. The officer noticed light flames coming from one side of the house, confined to the wood shingles. The officer used a handheld fire extinguisher to put out the flames.

The first fire occurred on Saturday May 11 at 11 p.m. Neither fire caused damage to the inside of the home.

Rabbi Avi Bukiet confirmed in a telephone interview Wednesday, May 15, that 129 Lake St. was the location of the fire.

To help pay for increased safety  at Center for Jewish Life, click here >>

The rabbi and his wife and three children live at the address.

Police have asked the public to help identify a person shown on surveillance video walking away from a home shortly after a suspicious outdoor fire broke out.

Anyone with information on this incident, or who recognizes the individual in the surveillance video, is asked to contact the Arlington Police Department at 781-643-1212.