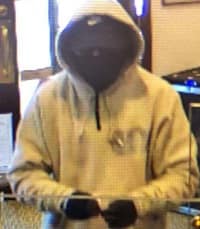 UPDATED: Arlington police are actively searching for a man who robbed Leader Bank in East Arlington on Wednesday, April 17, and ask the public's help identifying the suspect, shown in surveillance photo.

At 11:41 a.m., a man in a hood entered Leader Bank, 141 Mass. Ave., and passed a note to a teller demanding money. No weapon was shown, a news release from the department's public-relations firm said.

The man then fled with an undetermined amount of cash, heading toward Somerville.

He is described as a Hispanic or white male, about 6 feet tall and weighing 180 pounds. He was last seen wearing a gray hoodie with duct tape over the logo, a black hat and jeans.

Anyone with information is asked to call the Arlington Police Department at 781-643-1212, Acting Police Chief Julie Flaherty requests.

The same bank was the target of robbery in 2014.