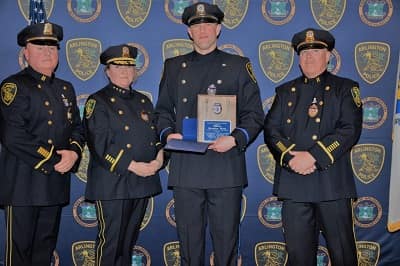 UPDATED: The Arlington Police Department has recognized several of its members for their exemplary service to the town over the last year.

Members of the department were honored for their dedication and hard work at the department's annual awards ceremony on Thursday, March 7, at the Sons of Italy function hall on Prentiss Road.

"Through his performance and actions, it is clear that Officer Wenz genuinely cares about the public he serves and the officers he serves with," Acting Chief Julie Flaherty said in a March 13 news release.

"He treats every call as if it is the most important call he has been assigned, giving comfort to those he serves. He treats everyone he comes in contact with as I would want members of my family treated. He epitomizes the department image we aspire to."

A member of the patrol division, Officer Wenz has been with the department for 11 years.

She was presented with the 2018 Employee of the Year Award.

"Suzanne Santorelli has shown that she can be relied upon to consistently do an outstanding job," Flaherty said. "She is often the unsung hero working behind the scenes that makes it possible for the Support Services Division staff to excel. Her consistency and quality of work is exceptional and her dedication has not wavered since the day she began her job."

Santorelli has worked for the department for approximately 20 years, and as the Firearms Licensing Coordinator for the Arlington Police Department has streamlined the department's licensing process.

This news announcement was published Wednesday, March 13, 2019, and updated to add names.