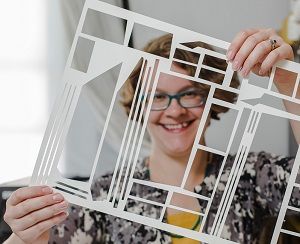 Abigail McMurray looks through one of her stencils. / Photo by Helen Makadia

Abigail McMurray grew up in a home where it was OK to make a mess. Her mother, a homemaker, enjoyed woodworking and gardening and was always drawing or doodling. She encouraged her children to be inventive and try arts-and-crafts projects. Messy equaled creative.

McMurray, who lives in East Arlington, grew up in Champaign-Urbana, Ill., and now focuses on crisp, clean lines and precision. She constructs both silhouettes and three-dimensional buildings out of heavy-stock paper, making one-of-a-kind portraits of homes.

Last fall, she was asked to show her work as a backdrop for the NBC-TV show “Making It,” which is airing with her crafts decorating the set along with the work of other creators.

“It’s the happiest hour on TV,” McMurray says of the program that asks contestants to make crafts in a variety of challenges. She compares it to the pleasant vibe of “The Great British Baking Show,” whose contests are often described as “nice.” Hosts Nick Offerman and Burlington native Amy Poehler, who starred together in “Parks and Recreation,” add a goofy flavor, sometimes making silly crafts of their own.

McMurray shows her work on Etsy, the online crafts marketplace, as well as at crafts shows and her website.  One of the judges on “Making It” works for Etsy and saw her work when she was a finalist in an Etsy contest. She provided the show with three pieces of her work, including one she made of the barn where the show takes place.

When not making things for “Making It,” McMurray is busy filling commissions from all over the country. She began working in paper as a child when she made origami. She majored in art at Bradley University in Illinois and later began making banners and kits so that people could make paper crafts of their own.

One day a friend asked whether she could construct a church out of paper for a pastor, because the church was closing and the friend wanted to give him a memento. She did, realizing “it might be something people would be interested in. They might like a house portrait out of paper.” She figured out a process and asked people on social media if they wanted portraits and got a positive response. 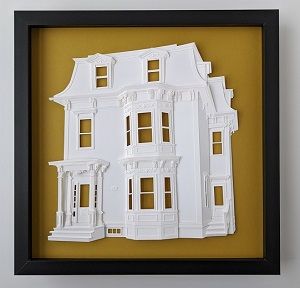 She works from a photo, tracing the picture and making the illustration on a computer. From the illustration, she separates the parts and the pieces and layers, figuring out how she’ll build it out of paper. She has a computerized cutting machine. “It’s kind of like a tiny Exacto knife that moves back and forth, almost like a printer but is able to cut any shape.” Were she to cut by hand, she says, the result wouldn’t be photo-realistic.

The result is a three-dimensional portrait, complete with dormers, porches, doors and windows. The most challenging was an Arlington Victorian complete with curlicues and intricate woodwork. She also makes silhouettes of houses, a much quicker process.

She is also now focusing on maps, places around the Boston area she calls “paper places” of well-known areas, such as Lowell or Cambridge, but will also do custom maps, such as a favorite place on a lake or a vacation setting.

Paper continues to appeal to McMurray because “it’s accessible and it’s everywhere. If you learn to make something out of paper, you can make it again and again . . . Everyone expects paper’s primary job is printed content. I’m communicating with the form of it instead of what’s on the surface, which is usually printing.”

McMurray and her husband, Brian, moved to Arlington four years ago and are pleased that they are within walking distance of the shops and cafes of Arlington Center as well as a five-minute walk to the Mystic River. She has participated in the Arlington Center for the Arts' Open Studios held in Arlington each year and will be back this fall.

Meanwhile, there’s a wait for the three dimensional portraits. “It’s painstaking work,” she says. “The last time I took orders was at the very end of March. I’ll be taking orders again in the fall.”

She can produce silhouettes faster and can turn around orders fairly quickly. Thanks to social media and the internet orders come from as far away as Australia and as close as Arlington.

June 9, 2021: Behind the Kusiaks' background music

UPDATED Dec. 17: The town Zoning Board of Appeals has approved, 5-0, the permit for the proposed…

All Select Board meetings, agendas in 2022