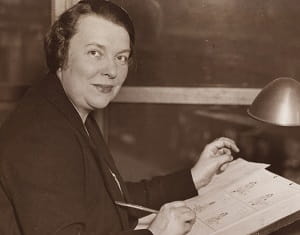 Edith Stevens at work in undated photo from www.edithstevens.com.

Rob Davison grew up in a two-family house on Churchill Avenue, his parents and siblings downstairs, his Aunt Edith upstairs. They lived as one family, and Davison was often in his aunt’s apartment, where she provided an almost magical entryway to a world of art and creativity.

Edith Winsby Stevens, called “Edee” by family and friends, was born in 1899 and was one of the few women cartoonists of her day. She drew a cartoon called Us Girls, first for The Boston Post and later The Boston Globe. Her artistic outpouring was extensive: She painted in oils, sculpted, made jewelry and enamelware, created stylish hats and bead work, and did metalsmithing.

“She was a huge influence when I was a child and into my teenage years,” said Davison. “She introduced me and my brother and sister to painting and sketching, and the house always smelled of turpentine and that smell kind of stays with you. She also introduced me to the joy of old objects and antiques and the stories they tell. It was all inspirational for me.”

Davison grew up to become a corporate creative director and design educator at MassArt, currently shifting to account manager and creative strategy. He is also digitizing his aunt’s work and has created a website about her, Edith Stevens.

Stevens never married or had children and enjoyed the frequent visits of her nephews and niece. She was born in Fitchburg, moving with her family to what is now Symphony Road in Boston and later to Arlington. She graduated from Boston Girls High, and from 1919 to 1929 worked at Factory Mutual Insurance, drafting building plans. In 1928 she entered a cartoon-drawing contest at The Boston Post. She didn’t win, but the editor called her in and offered a job. She became a staff cartoonist and launched Us Girls in 1929. It appeared six days a week for more than 30 years.

Us Girls spanned a wide range of attitudes, opinions and styles about women. A 1920s cartoon shows drawings of svelte, lovely, young women who garner admiration and attention from men until they vote, when Stevens shows that men see them as portly, matronly and not at all youthful. 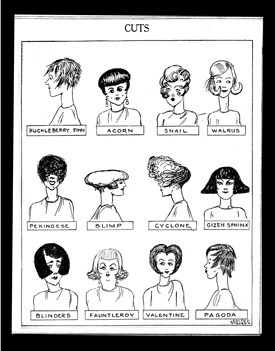 In the 1940s she reflected the shortages of World War II. A cartoon from 1945 shows two women about to have a meal in a restaurant. One is amazed and says, “My, My. To see a pat of butter again.”

In a teasing mode

Many cartoons are in a teasing mode about women’s fashions and hairstyles. In a cartoon from the 1950s Stevens makes fun of a coat that looks the same in the front and the back. “She never knows if she’s coming or going,” says one character.

Her cartoons made her a Boston-area celebrity, not “super famous,” said Davison, but often recognized when out in public. She gave talks on radio shows and was asked to judge contests. Readers wrote letters to the editor about her. “Before social media, that was the way people could share experiences,” Davison said. The secretarial pool at John Hancock, for example, wrote Stevens to tell her that her cartoons were on the wall of their break room.

In 1930 Stevens and her family moved to 216 Broadway in East Arlington and five years later to Churchill Avenue. Davison enjoys recalling her personality, someone who was warm and funny and whose speech reminded him of Julia Child’s fruity tones. “She had a way of making my name Robert, into three syllables,” he said.

Stevens was very well organized and clipped each cartoon by month and year so there are more than 10,000 clippings as well as more than 100 original pen-and-ink drawings. All were saved by Davison’s mother Miriam, now 91, who still lives in the family home. Stevens died in 1983, when Davison was a sophomore at Arlington High School.

While Stevens was included in a book about women cartoonists called The Flapper Queens: Women Cartoonists of the Jazz Age, by Trina Robbins, Davison hopes she will become better recognized and has talked with museums about exhibiting her work. Several are keenly interested but progress has been held up because of the pandemic.

“So far, the response has been quite strong, which has been gratifying,” Davison said. “The fact that she was a woman in a male-dominated industry adds depth to the story. In a kind of uphill battle she persevered.”

This news feature by YourArlington co-publisher Marjorie Howard was published Wednesday, May 5, 2021.