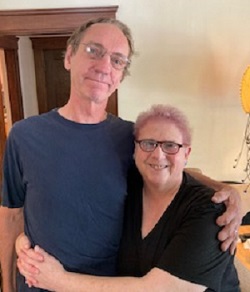 UPDATED Nov. 30: Every evening, Sue Thompson and her husband, Jeff, drink a toast. Whether or not they have a glass of wine, it’s to give thanks that they have been given another day despite challenges that have left them in disbelief.

About a year ago, Jeff Thompson, a carpenter who does fine woodworking, was having trouble with his hands. Buttons became difficult to manage, and worse, he couldn’t seem to turn the screwdriver he used at work. Weakness in his hands happened off and on, and doctors assured him it was a pinched nerve or perhaps carpal tunnel syndrome.

But last spring, following a visit to a neurologist and a battery of tests, Jeff and Sue learned he had amyotrophic lateral sclerosis, better known as ALS, or Lou Gehrig’s disease. ALS is a progressive neurodegenerative disease that affects nerve cells in the brain and the spinal cord. According to the ALS Association, once ALS starts it almost always progresses, eventually taking away the ability to walk, dress, write, speak, swallow and breathe, and shortening the life span; the average survival time is three years.

I’ve had health problems all my life, but this bowled me over.”
-- Sue Thompson

The initial symptoms can be quite varied. One person may have trouble grasping a pen or lifting a coffee cup, while another person may experience a change in vocal pitch when speaking. For Jeff and Sue, the diagnosis was stunning. “I’ve had health problems all my life,” said Sue, “but this bowled me over.”

Sue began losing her vision as a child because of an immune disorder and managed well, with vision remaining in one eye. But during the last four years, she has become virtually blind. “I see very little,” she said in an interview. “When I’m in a familiar environment I do pretty well, but when I’m not, I’m as blind as blind can be. I use a cane to help get around.”

An upbeat person who works to maintain a positive attitude, Sue always felt that if she ever lost her sight, she’d be OK. “I’ve got to tell you the truth,” she said, “it’s been a really tough adjustment. I never took my vision for granted, but this has caused a lot of challenges for me. I consider myself a warrior. Jeff has always been there for me with my health and vision problems, and it never interfered with our lives.

“I always felt that you only get one life and you might as well enjoy it. Life hands us all kinds of stuff, and now he has this diagnosis. I’m still trying to have the same good attitude.”

Shop in town 5 years, then in Lexington

Arlington residents may recognize Sue from her post at Firefly Moon, a gift shop that was in Arlington Heights for five years and then moved to Lexington in 2016. Sue and Jim Donvan were old friends and ran the store together. Anyone who shopped there was impressed, not only with the shop’s beautiful locally made crafts, but with the warmth and enthusiasm with which they were greeted. Pottery, handmade scarves and mittens, intricate jewelry -- even beautifully decorated umbrellas created a warm and inviting atmosphere, enticing shoppers.

The Lexington store’s lease was up in November of 2020, and because of the pandemic, Jim decided not to renew. Sue and Jim were hoping to find a small store in Arlington where they could continue to be open and also maintain a strong online presence. Right now, those plans are on hold.

Jeff, meanwhile, had to leave the carpentry job he held with Gilman, Guidelli and Bellow in Newton. He had started installing a door in the back of his house so that Sue could more easily let out their golden retriever, Sophie. Friends from work finished the job for him, something that surprised Jeff, who, said his wife, struggles with being the center of attention.

“Jeff and I work really hard on being positive, no matter what the world hands you,” she said. “But if someone had told me he had stage 4 lung cancer, I could have dealt with it better, because with cancer there is hope, there are treatments and research. This was such a shock. Every night I went to bed thinking someone would call and it was a big mistake. It’s a disease that has no treatments and no cure, so it’s difficult to have any hope.”

What has lifted the couple is the response of friends, former co-workers and customers, who have offered support and encouragement. They are grateful to be living in Arlington, where they have been since 1983, and appreciate the response from the community. Still, there will be financial problems beyond their ability to pay, including such necessities as medical equipment and prescriptions. Sue worries their house is too small to make it adaptable for the wheelchair Jeff will need one day.

Sue is still good friends with colleagues from her former job at Harvard Medical School, where she worked for 26 years in human resources, before retiring because of health problems. Her former co-workers suggested starting a GoFundMe campaign, something the couple would have preferred to not have to use.

After all that has happened, she said, “we try very hard not to drown in it. It’s still so new to us. I think we’re in shock, to be honest with you. Like any grief, it just comes in waves.”

Feb. 19, 2016: Firefly Moon: Closing sale in Heights as it opens in Lexington