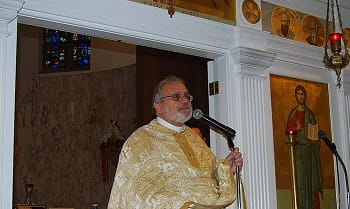 UPDATED, June 9, 2021: The spirit of Father Nick floats through Arlington, a Greek ghost that remains real.

In fact, in retirement, the priest is fully alive and conducting services, recently as far as away as Manchester, N.H., and as near as Cambridge and Brookline.

In July 2017, the Rev. Nicholas Kastanas was forced from the Greek Orthodox community that he had led for 28 years under claims later made in court that he had misused a fund for the needy that he had created. These claims have yet to be substantiated.

Reports by Theodore Kalmoukos in The National Herald lay out the history of the case, sympathetic to Father Nick, and bring it up to date. On April 21, he reports that later in 2017 "a massive exodus of families followed from the parish which was considered one of the most vibrant and populous not only in the Metropolis of Boston but in the entire Archdiocese of America.

"The parish had the potential to house a Greek Day School since it has the necessary building and facilities, but in the meantime dozens of parents took their children from the existing Greek Afternoon School of St. Athanasius in protest of Methodios' action towards their parish. They have established their own school in a rental facility in a neighboring town with great success."

At Father Nick's last service, in July 2017, an estimated 1,000 people filled St. Athanasius the Great nave, protesting. The leader of the Greek church in Boston, the Metropolis, ordered the removal of Kastanas' personal computer. The locks of the nave and the church building were changed. Kastanas was suspended from all liturgical activities.

Kalmoukos reported that, after years of court action and mediation, on Dec, 16, 2019, Judge Peter B. Krupp of Massachusetts Superior Court dismissed counterclaims against Kastanas.

After that, Kastanas filed a final appeal to a higher authority, Archbishop Elpidophoros as the First Ecclesiastical Authority of the Archdiocese of America. At length, the archbishop announced on April 5, 2021, lifted Kastanas's suspension.

Boston's Greek community was told by Metropolitan Methodios, Kalmoukos reported, that "the Holy Eparchial Synod lifted the suspension that was imposed upon the Rev. Nicholas Kastanas and included him among the ranks of retired clergy. Compliant to this decision the aforementioned is permitted to participate in liturgical services after requesting and receiving canonical permission.

"May the remainder of the Great Lent be for him an opportunity of self-reproach and heart filled, unfeigned repentance."

Greek Orthodox communicants have confirmed to YourArlington that Father Nick has recently officiated at services at the Seminary Chapel of the Holy Cross in Brookline, St. George Greek Orthodox Cathedral in Manchester, N.H., and at the St. Sava Serbian Orthodox Parish in Cambridge.

Father Nick is listed as retired clergy, because he turned 65 in June 2019 and had to retire to apply for Social Security and a small pension. Apart from 36 years as a Greek Orthodox priest, he has served for 37 years as professor at the Holy Cross Greek Orthodox Graduate School of Theology in Brookline.

"I am still very active in every way, shape and form," he wrote.

Father Nick has returned, but not to Arlington.

National Herald analysis, April 22, 2021: The Pain and Damage Are All That’s Left

This news summary was published May 26, 2021, and updated June 9 to add recent video.

For July 2019 photos, click here >> Boston Women's Market is scheduled to return to Arlington from…