Hundreds say goodbye to a librarian who had an impact 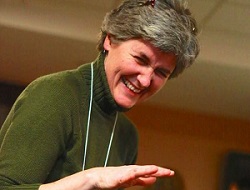 Family, friends, officials -- they came by the hundreds to Robbins Library on Friday, May 3, crowding into the main reading room and the downstairs community room. The line to enter stretched outside along Peg Spengler Way and Mass. Ave.

They came to say goodbye to Judi Paradis, who had died of cancer April 28. She was 60.

The event took place at Robbins because of her longtime ties to the library, that she had been a librarian in Arlingtonand that she had requested the location.

From a large family, the state-recognized, lifetime-achievement librarian received full recognition from members of her family. The eulogy, delivered by son Rob Carter encapsulates who she was:

"I’ve spent the past couple weeks trying to pin down words to describe who my mom was. And whenever I pictured myself delivering this eulogy I always assumed I’d be up here telling you what most of you already know:

"That she was one of the single most remarkable humans I’ve ever known.

"That she always bought the Spare Change Newspaper whenever she saw a vendor.

"That she was bringing her own bags to the supermarket long before that was a thing people did.

"That she banned my sister, Abby, and me from ever stepping foot in a Walmart.

"That she threw herself into each new endeavor with a contagious enthusiasm.

"That she was brilliant, kind, humble, funny, and driven to the point where she got a lifetime achievement award for her work in school libraries, and that was her second career.

Many of the ways she helped


Judi Paradis was not a trustee or a librarian at Robbins, but her ties to the town's main library run deep.

She served as the library's first coordinator of the Russell Fund, said Pam Watts-Flavin, the current children's librarian and a good friend.

Paradis was coordinator for 10 years, from the mid-1990s through early 2000s. The coordinator works with the head of children's services to oversee the management of children's programs, collections and services supported by the Anne A. Russell Children's Educational and Cultural Enrichment Fund.

After getting her library degree at Salem State, Paradis was a librarian at Peirce and Stratton as well as chair of the Friends of Robbins Library.

Andrea Nikolay, head of town libraries, wrote: "I had the privilege of working with Judi for about three years when she was still a Friends of the Robbins Library board member."

Further, Judi was "extremely involved in advocacy for libraries (public and school) at the local and state levels."

Active in many past school-override campaigns, she was involved in helping to establish full-day kindergarten and the Spanish program. Her interest in Spanish is clear as she helped found in 1988 the Arlington Teosinte, sister-city project in El Salvador.

Beth Soltzberg, who with Elizabeth Dray runs the group, said she got involved in 2004-5, when Judi was less active and was a librarian in Waltham. Yet "she always continued to support and encourage our work."

Read an article by Beth's son, Rafi, who interviewed Judi last year on the occasion of ATSCP/Teosinte's 30th anniversary >>

"But, when my dad, Abby, my mom and I talked about what she wanted for a funeral service, it became clear she had a very particular plan and a very particular message she wanted to convey. In fact, the only words that are going to be said at this podium tonight that weren’t handpicked by my mom are the ones I’m saying right now.

"And if you listen to the prayers, readings and songs she chose -- it’s clear that my mom didn’t want you to leave tonight thinking that she had led some special life. In fact, she’d probably be a bit upset that I had classified her as remarkable.

"Because calling her that can make us forget that Judi led a life that we all can choose to live.

"We can choose to pursue a career devoted to helping people.

"We can choose to give up a Saturday morning to help out at a food pantry.

"We can choose to join town committees and to form political groups to actually try to fix the things most people just complain about.

"Judi did. But she can’t anymore. Because my mother, the single most thoughtful and compassionate person I have ever met, got cancer, and it killed her before she was done fixing this place.

"So we don’t get the luxury of watching admiringly from the sidelines anymore. And we don’t get to just mourn the loss of another inspirational person and then shrug and act like we aren’t capable of doing those exact same things that made her an inspiration. It’s time for us to step up.

"And I’m thrilled to be able to share a few reports of people already doing just that:

"My aunt Renee and uncle Ben took their kids Henry, Scarlett, and Eliza to help clean up local parks and build community gardens as part of NewtonSERVES.

"My seventh-grade science teacher donated to Arlington’s sister city Teosinte, one of the first organizations my mom joined when she moved back to town.

"My friend Eesha donated a bunch of books that had just been sitting around her apartment to her local library so other people could experience those stories.

"Our mailbox has been filled all week with notices of donations to charities and nonprofits that my mom thought deserved your attention. And the one that brought me, Abby, and my dad all to tears was hearing that Plympton Elementary [in Waltham], where my mom had taught for 16 years, organized an all-school read-a-thon in her name this past Monday.

"Thank you everyone who’s made an extra effort this week to put a little bit of good out into the universe. Let’s commit to keep doing that, and choose to be the kind of person Judi always was."

Others in family participate

Brother Jack Paradis performed on guitar "Wondering Where the Lions Are" by Bruce Cockburn.

Performing "Rise Up" by Andra Day were Melanie and Meredith French.

Abby Carter read an excerpt from "The Once and Future King" by T.H. White.

Chris Hamblin and Jack Paradis performed the closing him, "Lord of the Dance," and those gathered joined in.

Dear daughter of Mary (Colgan) and the late John R. Paradis. Beloved wife of Bob Carter of Arlington. Loving mother of Abby Carter and her partner, Ronan Hanley of N. Carolina, and Rob Carter and his partner, Erin Wade of Arlington.

Also survived by many loving nieces and nephews. In lieu of flowers donations in Judith's name may be made to any of the following:​ ​

There was a recent call for wall art at the…