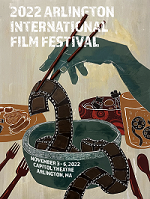 UPDATED June 15: The Arlington International Film Festival has announced that its 2021 "Voice of Our Youth" program will screen at FICIE, the international film festival in Elche, Spain, from July 8 through 22.

The trailer will run before the screening to an audience of more than 10,000 people, giving AIFF sponsors international recognization. See it here >>

The festival celebrates its 45th year in July >>

Arianna Stoughton, a junior at Mass College of Art, designed the winning poster for the 2022 Arlington International Film Festival (AIFF).

Her winning image, at left, features a ramen bowl serving films rather than noodles. “I wanted to highlight the international aspects of the film festival by depicting different food dishes from around the world, with some ingredients replaced with filmmaking iconography,” she said.

The winning effort was announced at a reception as the AIFF returned to the Arlington Center for the Arts for a fourth year. The poster contest, connecting visual arts with filmmaking, officially kicks off the 2022 film festival, to be held in November at the Capitol Theater.

Elena Mathis, the 2021 contest winner, unveiled this year’s winner. Mathis graduates from Mass College of Art this month and will be pursuing her interest in comic-book illustrations. 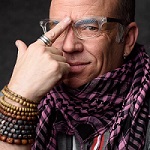 George Summers Jr., at right, was the guest speaker for the reception. Summers graduated in 1981 with a BFA in illustration and design from UMass/Dartmouth and an independent study in Batik and continued his arts education at the Museum School, Boston. He maintains a studio practice at Brickbottom, teaches Batik at the Brookline Arts Center and volunteers with SPOKE (formerly the Medicine Wheel).

His parting words to the illustration students, class of 2022: “Always have a sketch book with you to document what you see . . .don’t ever compare yourself with other artists, expect the unexpected interruptions in your career, and *never* lose your curiosity for life.”

This year’s master of ceremonies was L-J ShenFilerman, a 17-year-old writer/film director from Arlington. His film “Sanctuary” received the AIFF 2020 Best of Festival/Student Division Award and was a 2021 official selection in the All-American High School Film Festival, New York City.

The contest entries were evaluated by a panel of judges with expertise in composition, design, public relations and marketing. They are:

Venue partner: Arlington Center for the Arts; and

The deadline has passed for submissions to theArlington International Film Festival (AIFF) for its 12th annual festival, scheduled Nov. 3 through 6 at the Capitol Theatre.

The festival held its poster-contest award reception Friday, May 6, at the Arlington Center for the Arts, 20 Academy St.

Partnership with NINOVA Films, 'SEMS' during May

The AIFF announces its partnerships with NINOVA Films to screen "SEMS" this month.

Growth of the festival has been a result of the years invested in building relationships near and far. AIFF invites you and your company to sponsor "SEMS" on the AIFF website for May.

A Uzbek man establishes himself as a dog walker in Cihangir, an area of Istanbul where the intellectual people live. After 10 years of building a successful business, he is seen as a family member of his many clients and when he decides to return home, they question how they will survive without him?