See the full schedule of films >>

The Sunday, Oct. 29, program began at noon with 72 minutes of international shorts, starting with "Fist of People," judged Best Narrative, by South Korean director Dong-ki An. Fascinated by films of Bruce Lee that are banned by the state, a North Korean boy who has developed a deep respect for him is caught by the communist order.

A second round of international shorts began at 1:25 p.m. In "The Typewriter Repairman," director Thomas Draudt tells in seven minutes the story of a longtime business owner who is busier than ever in the digital age. This video award winner follows with a Q&A with Draudt and Tom Furrier of Cambridge Typewriter, East Arlington. 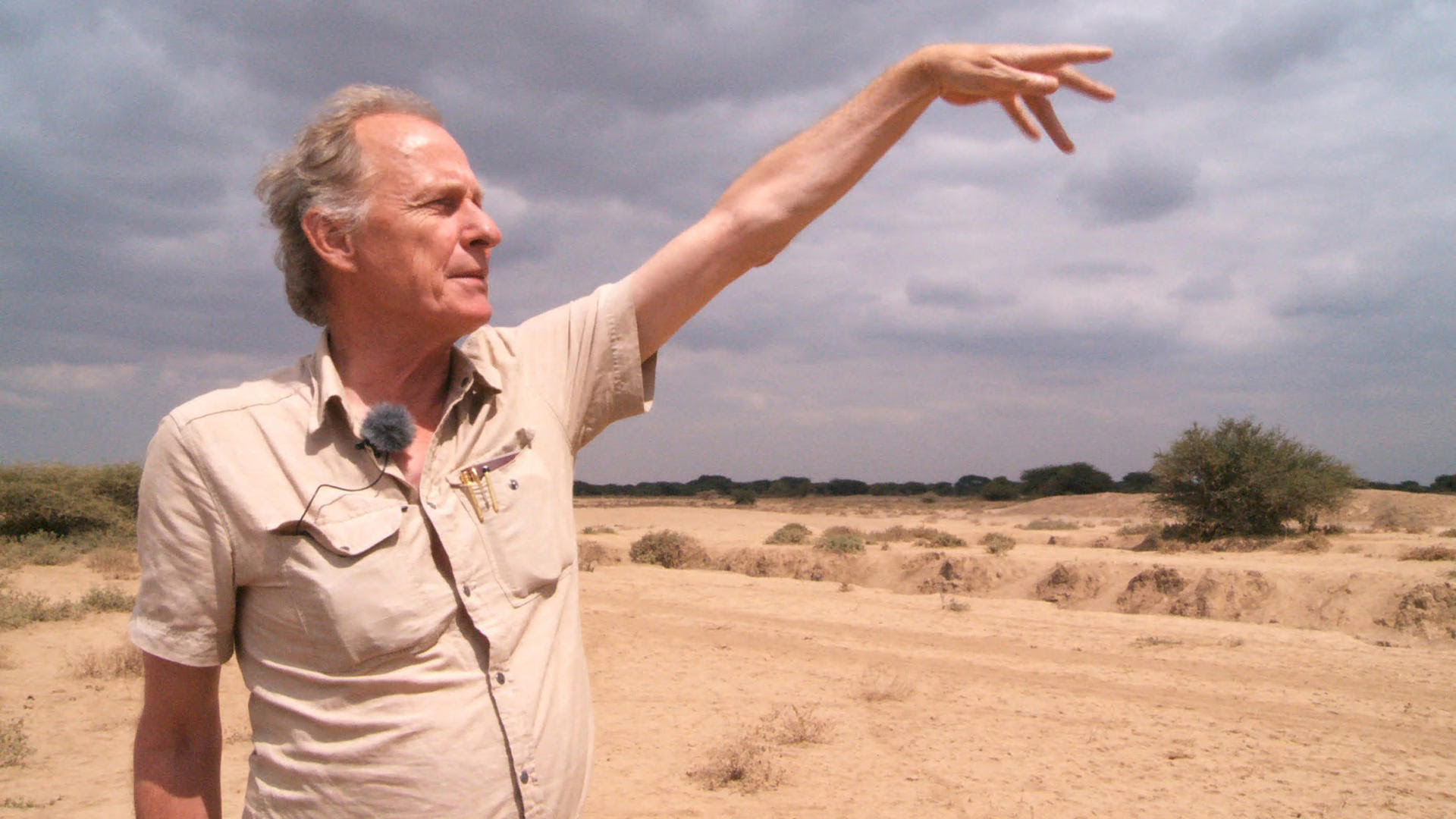 The festival concluded after 6:25 p.m. with "The Man Who Wanted to Change the World" (photo at left). Directed by Mariëtte Faber of The Netherlands, this 2017 documentary has its U.S. premiere. It is about Peter Westerveld, an inventor and artist whose environmental concern focuses on how the African continent is turning to desert.

"Voices of Our Youth," a two-hour presentation of student film, was held at noon Saturday, Oct. 28. A reception for recognized filmmakers followed at the Fox Library.

A full program concluded that night at 9:50 with "Have a Nice Flight, by U.S. director Jimmy Dinh, judged the festival's Best Narrative Feature. Find out about a short, hapless Vietnamese manicurist, who desperately needs to get to Vietnam to donate a kidney to save his sick twin brother. His broken English, cultural misunderstandings and his good heart bring his flight journey with dangerous, laughter, tears, hate, love and forgiveness.

Screenings Friday, Oct. 27, began with "Rattled," a 10-minute film from director Jaafar Almadhoon of India, which tells the story of Mohammed's traditional search for a bride resulting in more than 12 rejections.

Following is "A Courtship," a 71-minute documentary by U.S. director Amy Khon, which offers a peek into the practice of Christian courtship.

The festival began Oct. 26 with "Honk: A Festival of Activist Street Bands," a seven-minute 2016 documentary directed by Patrick Johnson.

Honk! is a festival of activist street bands that reclaim public spaces with their brash sound, political messages, and outrageous community oriented performances that originated in Somerville.

Following that was "Shadowgram," the U.S. premiere of the 66-minute 20`6 documentary by director August Contento of Italy. The film captures the memory of African-Americans living in the South Side of Chicago, 50 years after the abolition of the ignominious Jim Crow Laws.

Shadowgram was scheduled to be screened at the United Nations meeting of the High Commission on Human Rights in Geneva, March of 2017 in commemoration of the Worldwide Day in Defense of Human Rights. The screening was canceled upon request of the Trump administration.

Shadowgram has received the UNESCO Worldwide Patronage – The Route of Slaves recognition for its intense research on African-American heritage and community and is supported by the United Nations High Commission for Human Rights.

Following the screening was an interview with the film's producer via Skype from Paris.

The fest launched with a showing of "The Promise," by Director Zeljko Mirkovic, a 2016 documentary about the people of Serbia. The New England premiere of this film was held Saturday, Oct. 21, at St. Sava Cathedral,  North Cambridge.

For the past 7 seasons, the Arlington International Film Festival has curated a festival in October that celebrates the very best of new local, national, and international films for audiences to enjoy. AIFF’s Selection Committee watches hundreds of submissions each year and is delegated with the task of choosing films that represent the creative in storytelling and technical execution while holding to the festival’s mission of fostering appreciation for different cultures by exploring the lives of people around the globe through independent film. Each year brings forth amazing visions of filmmakers that we are honored to bring to Greater Boston.

This year, the judges have selected a film that will kick-off the 2017 Festival that is an homage to our Serbian community, representing the vision and passion of the French as well as the Serbian communities.

THE PROMISE by director Zeljko Mirkovic

In a remote village in the north of Serbia, once known as a prosperous wine region, something unexpected has happened. A French family has moved into the poor village now nearly deserted.

A new challenge awaits them back home in France – how to persuade sommeliers that superior wine can be made in an unknown and problematic region? Can they awaken hope and breathe a new life into the old village? Thus, The Promise is born.

The festival has a free, official app, Whova. Download it here >> You'll be able to:

After downloading, sign up on Whova with your email address that you used to RSVP for the event, or sign up using your social media accounts. If you are asked to enter an invitation code to join the event, please use the following invitation code: aifqk

The Arlington International Film Festival (AIFF) has announced that YourArlington.com, CambridgeDay.com and InsideMedford.com has signed on to sponsor the 2017 AIFF Student Filmmaker Awards program.

In an Aug. 31 newsletter, AIFF wrote: "YourArlington.com has delivered the freshest news and the sharpest opinions about the town since 2006. Managed by veteran journalist and longtime resident Bob Sprague, the web presence is the only Arlington-based 24/7 media site. Since the inception of AIFF in 2010, YourArlington.com has been a strong supporter as well as an advocate.

"CambridgeDay.com is an independent source for news, features, commentary and event information serving primarily Cambridge since 2009."

AIFF continues to unearth some of the best independent storytellers in all genres. It presents a diverse array of local, national and international narrative and documentary features, shorts and student films.

Festival organizers anticipate another year of exceptional films that foster appreciation for different cultures by exploring the lives of people around the globe through independent film and nurturing the next generation of filmmakers.

Each year, the festival hosts more than 2,000 cinema fans and presents more than 50 screenings. Filmmakers, producers, students and media outlets from across the United States regularly converge at this festival and exit Arlington infused with big ideas and extraordinary new connections.

In a news release, Director April Ranck says of the festival: "The enthusiasm that culminates in Arlington around the film screenings, visiting directors and conversations is exciting; people come together infused with energy and ideas because of the stories shared by amazing indie filmmakers. It is wonderful to see the interaction among community organizations, businesses/corporations, educational institutions, and audience members. The Arlington International Film Festival is an annual event not to be missed!"

Mission statement: To foster appreciation for different cultures by exploring the lives of people around the globe through independent film, and to nurture the next generation of filmmakers within our community.

Tax-deductible contributions should be made payable to the festival’s fiscal agent, MIRA, a non-profit 501(c)(3) organization.

The winner of the poster design for the seventh annual festival was chosen at an evening that celebrated many art forms -- including an exhibition of the poster illustrations, live music, poetry and story-telling.

Joshua Chace was awarded a cash prize of $500 by the festival's sponsor, Watertown Savings Bank.

A senior at Mass College of Art and Design, Chace offered this view of his work: "The imagery of the film reel and flags over a colorful painted surface lets the viewer know about the art and creativity that happens at this international film show."

He said he is better at computer art than drawing, and leaned on his Photoshop skills to create the final product. Surprised to be named the winner, he thinks producing another poster would be fun.

Festival films must be 30 minutes or less ("shorts"), and in one of the following categories:

In keeping with the festival’s desire to promote local artists, the organizers invite local student filmmakers to submit their shorts. Part of AIFF’s mission is to nurture the next generation of filmmakers within our community. To be eligible, students must be 18 years old or under and enrolled in high school. High school filmmakers’ submission fees are waived. 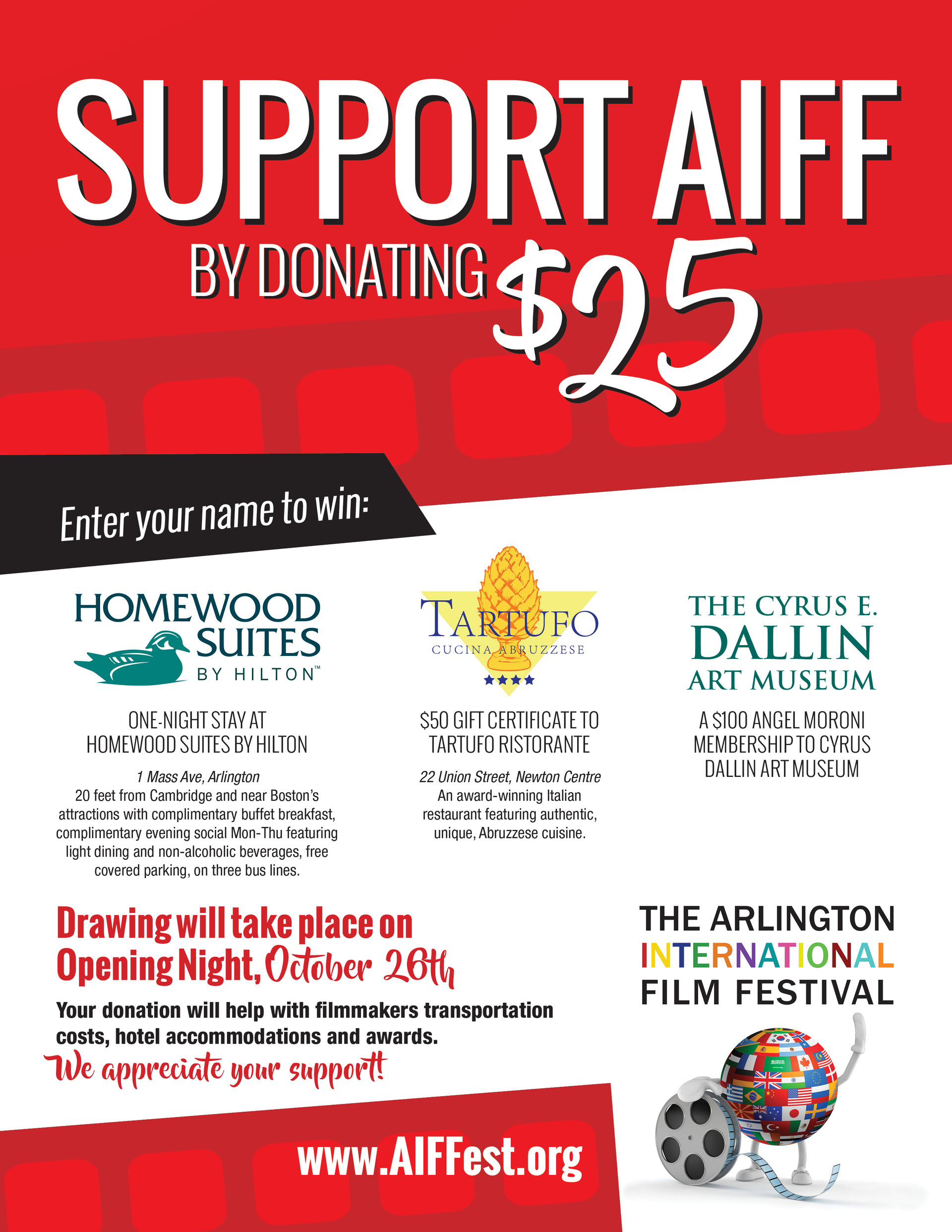 The festival has announced an international partnership with Purple Arrow Films.

Established in 2016, Purple Arrow is a film-festival consultancy involved in worldwide distribution of films.

Purple Arrow aims to promote traditional forms of film making along with the importance of film festivals in the overall cycle of a film.