I put them on the wall so every family can look into their eyes and see that they are not alone in their grief.” -- Gina Johnson 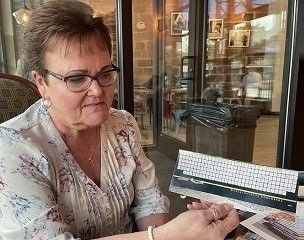 UPDATED Sept. 2: An exhibit called “Faces of Remembrance Display Wall” is planned for the Arlington Community Center, 27 Maple St., from Sept. 6 through Sept. 10.

The event, hosted by the town's Council on Aging, features a collection of portraits by Arlington artist Gina Johnson memorializing the Massachusetts residents who died in the terrorist attacks on Sept. 11, 2001.

The collection is composed of detailed, pencil memory portraits of “209 individuals,” Johnson says. She put all of them on a 22-foot-long display wall made of two pop-up boards. Johnson believes it is more healing to view a wall of portraits drawn in memory of the individuals than to look at an individual picture.

“I put them on the wall so every family can look into their eyes and see that they are not alone in their grief,” she says.

Among the 209 individuals, one is from Arlington -- Joseph Mathai, a 49-year-old managing partner with Cambridge Technology Partners who divided his time between Boston and New York, YourArlington reported last year.

Wall may have taken 9 years

Drawing a single portrait takes Johnson an hour; completing the 9/11 portrait wall took her many years. “Probably from 2007 to 2016,” Johnson estimates, unsure of the exact dates that she completed the portraits. For her, the duration of the project or any other means of measuring her efforts do not seem to matter as much as the drawing per se.

“It’s about seeing their hearts, looking into their eyes, and it brings me joy,” Johnson describes the drawing process.

She believes it is an act of celebrating life.

Johnson started making portraits when she was 16 and has since completed many volunteer projects, including the 9/11 portrait wall. Influenced by her mother, who served in the Navy, Johnson has faith in kindness and compassion.

Over the years, Johnson searched online and then drew portraits based on the public photographs of the deceased on 9/11 shared by their families. Johnson would look for lovely expressions in the pictures and then work to produce portraits that would bring joy, rather than sadness, to the family. When she was not satisfied with the pictures she found, she would search for others. During the time she worked on the project, she would search on Google every year, at times every month, for new pictures.

She did not know any of the 209 individuals. She says she will never intrude on a family’s privacy, and this is why she will not initiate contact. But she hopes to send the original portraits to the families. “That’s my dream,” she says.

Johnson is proud of her work. “If you look at each one of them, they have sparkles in their eyes,” she says.

She calls the project “a personal mission.”

“Not everyone will understand,” she says, adding that she has encountered some people who do not comprehend her motivation to create and arrange “a wall of dead people.”

Johnson doesn’t want to be seen as someone putting efforts into work for public recognition that can then be politicized. “What I am doing is honoring their service and finding a picture that represents and shows something that’s memorable,” she says.

Johnson trusts the revamped community center and the town. She has worked in the Legacy apartment complex, in the Center, for more than a decade and has had many good memories. “I made the whole place a community,” she says.

In the long run, because she wants to upload the portraits on her website Operation Home Ties, she has been looking for technical support — so that any given family may one day more easily find the portrait they seek displayed within hundreds of its like.

“That totality of everybody together really lessens the horror of having lost their loved ones.” Johnson says.

Sept. 8 coffee with artist: Join Gina from 9 to 10 a.m.Thursday, Sept. 8, for a coffee hour to discuss her project.

This feature interview by YourArlington editorial intern Jingfei Cui was published Thursday, Aug. 25, 2022. It was updated Sept. 2, to add an artist's date.