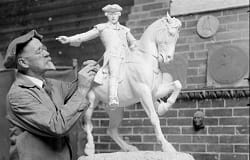 Cyrus Dallin with a replica of his famed Paul Revere sculpture in undated photo.

At 7:30 p.m. Wednesday, April 7, learn about the origins of what may be Boston’s most famous statue. Beloved by Bostonians and recognized around the world, this statue is as an emblematic image of the city and spirit behind the War of Independence.

This virtual program introduces participants to Dallin and illuminates the 57-year journey, and tortuous path, that Dallin pursued to create this work and honor Revere. You’ll also learn how the dynamic power shifts that characterized Boston politics in the early 20th century helped shaped his endeavor.

Born on the Utah frontier, Dallin was just 19 years old and freshly arrived in Boston for artistic training in 1880. Three years later, he entered ― and won ― the city’s competition to honor Paul Revere’s legacy with a monument in Copley Square.

However, it was not until 1940 ― 57 years, seven versions of the same statue and countless twists and turns later ― that Dallin’s vision was realized in the North End’s Prado, where it stands today.

In the intervening years, Dallin continued his training in Boston and Paris and became one of America’s most celebrated sculptors. His work was inspired by classical forms, figures in Euro-American history and America’s indigenous peoples. His many public sculptures bring beauty and a unique historical perspective to shared spaces across the nation, including Chicago, Salt Lake City, Philadelphia, St. Louis, Syracuse and Boston. His “Angel Moroni” graces the top of the Salt Lake Temple in Utah and has been replicated worldwide.

Dallin remained an active and outspoken advocate for the rights of indigenous peoples throughout his life. He mentored a generation of sculptors as an instructor at the Massachusetts Normal School (now Massachusetts College of Art and Design), where he worked for more than 40 years. Dallin also contributed much of his time and talent to make his adopted hometown of Arlington, Massachusetts the vibrant community it is today.

Learn how this story of perseverance proved to be not just a culmination of Dallin’s lifelong efforts, but one that also further developed Paul Revere’s legacy and image for future generations of Americans.

On the Freedom Trail, in Boston’s historic North End, the Revere House was home to patriot and silversmith Paul Revere from 1770 to 1800. Revere left from the house in 1775 to begin the ride that Henry Wadsworth Longfellow immortalized in the poem, “Paul Revere’s Ride.” Built about 1680, the Paul Revere House is the oldest house in downtown Boston. At 19 North Square in Boston, it is open for guided tours on Thursdays through Sundays, 10 a.m. to 4 p.m.

For more information about what to expect before you arrive, see the Before You Arrive section of the website here >>

Founded in 1998, the Cyrus Dallin Art Museum is the only museum in the United States solely dedicated to preserving the legacy of this internationally recognized artist, educator and indigenous-rights activist. With exhibits including more than 100 works of Dallin’s art, including approximately 50 sculptures, 10 paintings and several coins and medals, the museum’s mission is to promote new insights into our shared history by exploring the life, work and values of this celebrated sculptor.

Learn more at Dallin.org and by visiting the museum in Arlington.

After three months, the new exhibits are ready.…