The Select Board has unanimously agreed to send a letter to MassHousing regarding “The Residences at Mill Brook,” a proposed 50-unit multifamily development and 1,000 square feet of commercial space at 1021-1025 Mass. Ave., near Brattle Square.

The proposed project by the Maggiore Co. of Woburn would combine two parcels between the Highland Fire Station and Quad Cycles, a bicycle business, and develop a four- to five-story building with at-grade parking and a small retail space on the ground floor, according to the comprehensive-permit application.

“This site approval is not the same thing as the 40B process, which is a lengthy process with different reviews. This is a narrower scope of responsibility, such as whether this site and its design are appropriate and financially feasible," explained Town Counsel Doug Heim.

An estimated 100 people semi-circled the Town Hall stage, as a number of state officials helped say goodbye to Adam Chapdelaine, with generosity and humor, on June 17, his last day as town manager after serving here 12 years.

In September, he becomes deputy director of Boston’s Green Ribbon Commission, an agency begun in 2010 by then-Mayor Menino seeking to help the city adapt to climate change.

Following an indoor event on Friday, June 17, which almost seemed prepandemic, except for a few wearing masks, here is a summary of farewells to the town's manager on his last day. Jim Feeney, deputy town manager, served as emcee.

"So, can you imagine having five people to whom you directly report? Whether they see themselves as your bosses or the presidents of your fan clubs, members of the Select Board are a handful; and with there being five members on the Select Board and five digits on a hand, the metonymymay be apropos.

Hot weather is on the way, and we’ll soon have a new venue to enjoy refreshing Japanese food—sushi, sashimi, maki, salads, teriyaki specialties and more.

Summer Sushi, 474 Mass. Ave., where USushi used to be, will serve lunch and dinner. Hours are Monday through Thursday and Sunday noon to 9 p.m., and Friday and Saturday noon to 10 p.m. The restaurant has seating for 18 patrons.

More than 150 EMS workers at Armstrong Ambulance Service have voted to join Teamsters Local 25 in Boston, the union has reported.

It is believed to be a first for employees of the the Arlington-based company, founded in 1946, which has not responded to requests for comment.

The union called the June 15 vote "overwhelming," but did not report a vote count. The union said the victory follows a nearly yearlong campaign, which "faced aggressive union busting by the company."

Despite the title, Select Board Chairman Len Diggins told YourArlington, "he is as much the town manager as Adam was, with the exception that his contract ends . . . about 13 months from now instead of running for three years.”

In January 2016, Pooler was named the town’s deputy town manager and in 2018 became director of the then-formed finance department. He began his new role June 18.

Friedman votes to pass bond bill that include town projects

“The Senate bond bill sets the stage for important long-term investments in the Commonwealth,” said Friedman, vice chair of the Senate Committee on Ways and Means. “I’m really proud of the bond authorizations I secured for projects in the 4th Middlesex district. I am also pleased to see the bill includes a feasibility study for a replacement to Bridgewater State Hospital, whose oversight needs to be moved from the Department of Corrections to the Department of Mental Health.” 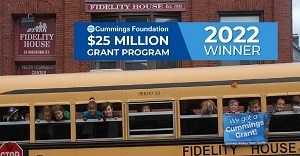 Fidelity House has been awarded a $100,000 grant, to be given in two installments, earmarked for its youth transportation feeds for this year and beyond.

It is the among 140 local nonprofits -- and the fifth in Arlington -- to receive a 2022 award through the Cummings Foundation’s $25 Million Grant program. The others are Visiting Nurses & Community Care, AYCC, Food Link and the bIRch House.

Fidelity House, serving the youth of Arlington since 1955, is dedicated to meeting community needs by providing affordable, diverse and quality services for all ages. Youth participate in its summer day camps, school-age child-care program, preschool as well as children and teen services.

Fidelity House has been dealing with the impact of regulation on transportation affecting both the school year and summer programming. That was further complicated by the disruption of services during Covid-19, resulting in the lack of available vehicles. 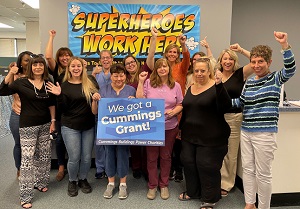 Visiting Nurse & Community Care,  in East Arlington, is the fourth nonprofit in town to announce it has been awarded a Cummngs grant. It will receive $500,000 over 10 years.

Others in town receiving awards through Cummings Foundation’s $25 Million Grant Program are AYCC, Food Link and the bIRch House.

The Cummings grant will allow Visiting Nurse & Community Care to provide technology to families and our home health and nursing staff so that there can be ongoing video communication to enhance care.

PacSana technology, which encompasses wearable devices aimed at improving care while facilitating independent living, will be provided to families. The technology allows users to monitor the activity levels of loved ones via an app.

Environment
UPDATED June 26: The following viewpoint about owls and rat poison was written by Liz Reisberg, in collaboration with Carol Band, Dana Cooperson and Peggy Gardiner. In photo, Diane Welch, the town's animal-control officer, at the May Spring Fling, tells kids about owls. When two Great Horned Owls courted, nested, and produced two babies in Menotomy Rocks Park, visitors to the park were thrilled. Many in the neighborhood came daily in the hope of an owl spotting and watched with great pleasure as...
Read more

Neighbors
Carey M. Theil of Arlington submitted this obituary. He is executive director of GREY2K USA Worldwide, a nonprofit that works to pass stronger greyhound protection laws and end the cruelty of dog racing. A greyhound named Brooklyn, who inspired the successful international campaign to close down the worst dog track in the world, died June 22 in the Boston area. Brooklyn was born on Dec. 10, 2008, at a breeding farm in New South Wales, Australia. After failing as a racer in 2010, he was shipped t...
Read more

Poetry
UPDATED June 24: Steven Ratiner, Arlington’s poet laureate, sought submissions in February 2020 from Arlington residents to contribute to "a rather unconventional, utterly delightful way to inject poetry into the everyday." It was to remain secret until its debut during April’s National Poetry Month. Then the coronavirus hit. In June 2021, he offers Red Letters 3.0. PUBLISHED:  I was asked to write an essay for Askold Melnyczuk’s Arrowsmith Journal about what I learned from the first y...
Read more

The letters on the counter: a personal story

Community
Sheri A. Baron, at right, a Precinct 7 Town Meeting member, wrote the following essay, recollections of her late parents: Tell people how much they mean to you – now. Tell them often, knowing that life can change without warning. Hug them, show them affection. If you are a distance away, send a text, an email or a letter. Just do it and send it, or you will have regrets. I know because I do. I lost my mother 15 years ago. I sometimes need to  think a moment to land upon the ...
Read more

Letters to the editor
Submitting this letter to the editor about housing was Alejandro Paz of Marathon Street. Katie Mogg’s article on Arlington’s housing crisis ("Arlington is facing a housing crisis: Experts, residents explain their views") struck a nerve with me as an Arlington resident who worries about the increasing challenges around housing costs here and around the state. I recently moved to Arlington for the second time, having previously lived on Brattle Street about a year ago. As Mogg’s article describes,...
Read more

What do we do about Arlington's news desert?

Media
Dave Levy, a Precinct 18 Town Meeting provided this opinion about local news and Town Meeting: Click image to access >> During the time overlapping with Town Meeting, I learned that The Arlington Advocate had merged with the Winchester paper, effectively eliminating the Town of Arlington having a true local paper that has material financial support to cover local issues en masse. Later, it was reported over the Arlington Email List that the new Advocate & Star would not have a local re...
Read more

Letters to the editor
YourArlington's policy about letters to the editor UPDATED May 24: YourArlington welcomes opinions of all kinds from local residents, including those about the U.S. Supreme Court's view of Roe v Wade. Letters are reviewed for fairness, factualness and taste. This site welcomes letters about any issue that stirs the public mind. Longer opinion pieces are also welcome. NOTE: When emailing a letter to The Advocate & Star, consider copying YourArlington at the same time. Your opinions will ...
Read more

YourArlington thanks its first two generous underwriters, with more to come. To learn more, please click the logo below. We hope you will support Arlington businesses and thank them for supporting us.

An informed Arlington
keeps democracy alive:
Why we are your news source >>

Arlington Reads Together: Nominate title for '23 by July 8

The Arlington Reads Together selection committee is seeking…

Summer reading programs are back at Arlington’s libraries…